Did you know every Cryptocurrency transaction you do can be traced back to you? There’s this thing called “Blockchain” which logs every Crypto transaction. Although this transparency can be solved using Mixers, and that’s what this Smartmixer.io review talks about.

For better understanding, let’s simply choose a Bitcoin address, say “1F1tAaz5x1HUXrCNLbtMDqcw6o5GNn4xqX” and search for it on the Blockchain. (Click here for search results). This is what’s presented to us:

As is evident, every detail about the address including its total funds, Hash, number of transactions, output addresses and everything else is just as easily found!

Now imagine yourself purchasing something off any E-com website using Bitcoin.  Using the address you used to make the payment, your real-life identity can be uncovered in a matter of minutes.

But when a mixer is used to process the transaction, you coins are kept with the mixer, and fresh new coins belonging to some other people, group and organizations are sent out to the address you specify.

Hence the website/platform where you purchase the product from, won’t be able to trace that transaction back to you, because it’s not your coins which were used for the payment.

Well, there are a couple features which Smartmixer.io brings with itself that were totally unique and unprecedented, which made me scribble this Smartmixer.io review down. Let’s take a look then?

The Smartmixer.io Interface is without doubt the most intuitive, easy, and colourful Interfaces I’ve ever seen.

Even though it looks cluttered, at a closer peek it’s clear that all those different colours and indications are only to make things easier.

Users can add new addresses by clicking on the “+” button. Each new address is colour-coded. (Why?).

So that when you specify the exact time-delay and fund-distribution for that address, you can do so easily using the provided sliders.

Each address will have its own slider-knob corresponding with the colour of the address. Changing any value for the mix is as easy as sliding the slider-knob left or right. 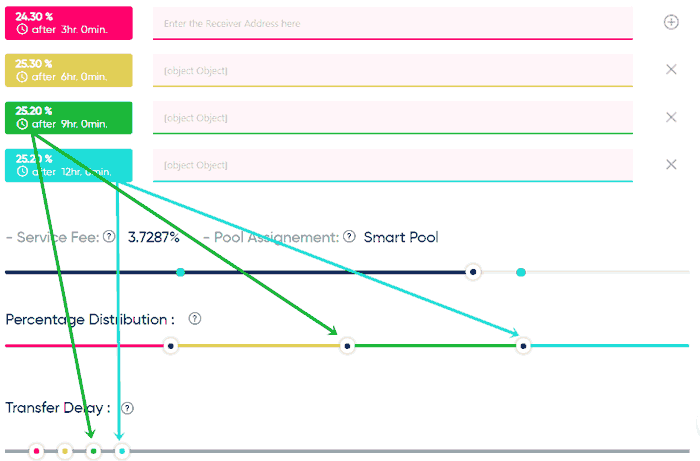 This is the only mixer we’ve seen so far which supports the mixing of coins more than just Bitcoin. This is what makes Smartmixer.io not just a “Bitcoin mixer” rather a Cryptocurrency mixer in general.

It supports the mixing of Bitcoin Cash and Litecoin, in addition to Bitcoin. Ethereum too is being added to the platform and will be available for mixing in the near future.

This is one of the “unique” features we mentioned earlier in this Smartmixer.io review.

What most other mixers do is, they pool all the input (unclean) coins from all the users, break them down, inter-mix them, and send out coins to a user as clean coins (excluding his own unclean coins).

But the coin-pools at Smartmixer.io aren’t so simple. It boasts of 3 separate coin pools, namely Standard, Smart and Stealth Pools.

This is the most common pool, the coins are simply mixed with the coins coming in from other users.

This is what most other mixers use by default for all of their mixes. The sources or previous history of these coins may or may not be as anonymous or clean as you may want.

The Smart Pool is a mixer of coins, both from the standard pool and Smartmixer’s own reserves and investor’s coins.

This is the most anonymous coin-pool available on SmartMixer (hence the name). It comprises of coins only from Smartmixer’s own reserves, and its investors’ money.

This ensures that no unclean, or unchecked coins previously owned by someone else from the Standard Pool get mixed with the Stealth pool.

Because of these additional coin-pools, Smartmixer naturally is capable of providing more anonymous coins than mixers which use one pool for all their outputs.

These three are the core-features a Cryptocurrency mixer is made up of.

The fee is important because regardless of any platform’s features and potential, it’s only useful if it’s affordable or if the pricing is fair.

As far as Smartmixer.io goes, it grants 100% control of the fee to the users. Users can choose the amount of fee they’d like to pay and adjust it accordingly using the fee slider-knob.

The minimum fee however has to be 1% while the maximum can be 5%.

Note that this fee is what controls your coin-pool. The higher fee you decide to pay, the better pool is assigned.

Alike every other Bitcoin mixer, this Cryptocurrency mixer too needs to charge a fee for each additional address.

Registering on any platform, regardless of how private it is will always be a “less anonymous” mode of access as compared to a no-registration mode, don’t you agree?

Smartmixer.io being committed to providing the most anonymous environment to its users is completely registration-free.

No registration whatsoever is required to mix any of the coins, any number of times.

Again, “Logs” and anonymity don’t exactly go hand-in-hand, do they? Smartmixer.io is transparent about its logs policy.

It does stores logs, but only for a maximum of 24 hours. This is to help users with issues and problems arising with their mixes.

Once a mix is successfully completed, the logs are auto-deleted after a 24-hour period.  Or, the user has the choice to manually delete the log instantly on the transaction page.

As compared to most other mixers which store logs for 72-hours or couple weeks, I’d say Smartmixer’s policy is a lot more acceptable.

Not a lot of mixers offer the “Letter of Guarantee”, Smartmixer.io does. It’s a document detailing all the data about your mix.

It’ll have the output addresses, time-delay, fund-distribution etc. It’s used to associate and prove your ownership of the unclean coins.

In case of a problem with the mix, this letter of guarantee helps the team solve your problems after authenticating that you indeed are the rightful owner of the funds in question.

A simple, yet a very important feature that quite a few mixers miss. Smartmixer offers a “mixing code” as soon as a new mix is initiated.

Although, the mixer also has unique “sets” of each reserve even for the same pool. For e.g. if the mixing code is specified, even if you’ve selected the same pool as before your output will be sourced from different sets of the same pool. So the pool remains the same, but the coins do not overlap.

And then, the mixing code is also used as a loyalty voucher. So everytime you mix using the code, the coins are linked to your previous transactions. This tells the mixer of the total amount you’ve (or the user owning that mix-code) has mixed with the mixer.

Based on this, for returning  customers there’s a discount available on the fee. The discount, or the mix-amount on which it’s triggered isn’t mentioned.

An Onion version has both its pros and cons. And it “is” a feature even though it doesn’t look like one. The entire point of Bitcoin-mixing is to promote anonymity.

Clearnet domains aren’t anonymous and the govt. has quite a bit of control over them. This hurts your anonymity. No matter the log-policy, or anonymity-claims made by a company there’s always a  chance of your Bitcoins leading back to you.

Sure, using one of the best VPNs decreases those chances by quite a margin, it however still remains a possibility. Not due to the “technicalities” alone, but the “legalities”. The companies with Clearnet domains can be coerced into revealing client-details by govt. agencies and law enforcement.

However, the clearnet mixers are a lot more trustworthy. The reason remains the same, they’re bound by law and can’t run away with your coins as easily.

On the other hand, .onion domains aren’t shadowed by legal requirements and authorities as much.

It largely depends on the server location, database isolation  policies of the mixer (for the clearnet and .onion clients separately), hosting company policies and a lot more. But, .onion domains still offer tons more anonymity and privacy than clearnet domains. And, for a company as established as Smartmixer, I doubt their .onion service is any “less-trustworthy” than its clearnet counterpart.

Smartmixer offers both the options. If you wish to keep your “guarantee” intact, you’ve got the clearnet domain. If anonymity is your priority, the .onion domain covers you.

Here’s a sum-up of all the Pros and Cons that the mixer brings with itself:

A number of mixers were recently seized by the U.S Govt. on various grounds. This may lead to misleading speculations. Let’s just say that using Smartmixer is completely legal.

What you’re doing is, you’re giving the mixer your coins and taking back new, fresh coins. This act by itself isn’t illegal.

Also note that you can’t control who uses a mixer for what purposes. So even in case a mixer is seized, the users who used the mixer aren’t all rounded up. Only those users are in trouble who actually used the mixer for illegal activities, and it could be proven.

Although  just to be sure, we always advocate using the .onion address of a mixer (http://smrtmxdxognxhv64.onion/) paired up with a really good VPN. A VPN which supports Tor over VPN, double VPN, has a no logs policy and still provided impressive speeds. NordVPN is a pretty good choice to go with before you start mixing your coins.

So let’s wrap this Smartmixer.io review up folks? In my personal opinion, it’s one of the most advanced and feature-rich mixers.

The availability of multiple coin-pools does justify the slightly higher fee. Then multiple coins can be mixed, and it also offers support.

The fact that a user doesn’t need to Signup, or that it doesn’t store logs covers the “anonymity” aspect of a mix quite well.

In other words, I did struggle to find features which it lacked as compared to other mixers, and I failed.

Although I’d like to know your take on this Smartmixer.io review, as well as what you think of the platform in general? Do make use of the comments. 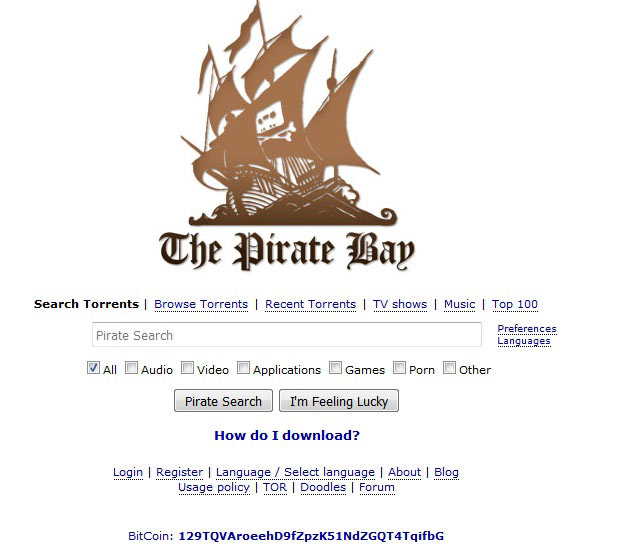