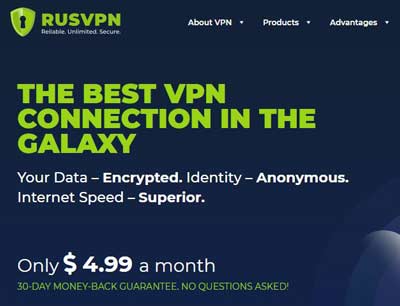 Gone are the days when a VPN was just a choice or an option; this being 2021, privacy and  anonymity are a myth and that makes these VPNs a need of the hour; that’s what shall be discussed throughout this RusVPN review.

You don’t want the govt. (and/or other third-parties and individuals) snooping, recording and registering each of your clicks and website-activities, do you?

And it’s not just about anonymity or privacy, due to the censorship on content and websites (mostly due to political or bureaucratic reasons) users lose access to the “whole” of the Internet.

Major sites such as Google (and its other products) and Facebook have been banned from time to time; or permanently in countries such as China, Russia, Bangladesh, North Korea or even India!

A lot of popular mobile games and apps too such as Pubg, TikTok and others have either been banned in some countries or a usage-time limitation has been imposed on them.

How Can a VPN Help?

Before getting into the finer details of this RusVPN review; let me get you a brief idea of how can a VPN exactly help:

A VPN does a lot more but for the purposes of this RusVPN review I believe the primary features or basics do suffice, don’t they?

The “RUS” in RusVPN stands for- “Reliable, Unlimited and Secure”, which already hints at some of the features that the VPN is willing to provide, however here’s a full feature-breakdown of the VPN before diving deeper into this RusVPN review:

Also, considering how according to Statista, 47.96% of total global Internet traffic is from mobile devices, let’s work through its mobile version first.

Once downloaded (less than 8Mb on Android), the app can be directly run without requiring any mandatory registration as the company provides 7 days of free trial to all new mobile users.

Once launched, this is what the welcome dashboard looks like: 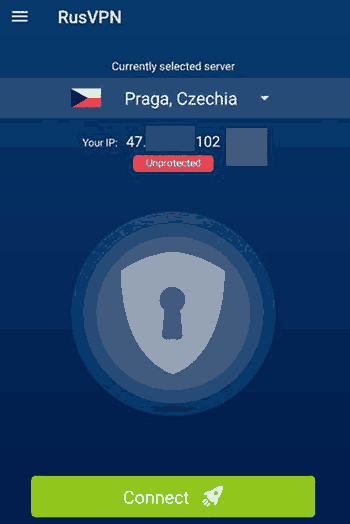 As is evident, even if you’re a complete newbie and have never used a VPN before, simply click on “Connect” without doing anything else and the VPN would do its thing.

Or, you can click on the “currently selected server” option to choose a different country to connect to.

Just below the country, it shows your current IP address and country-flag; as well as your status (Protected/Unprotected).

Registering the VPN on Mobile

It’s extremely easy to register the VPN on a mobile device as well, simply click on the three horizontal lines on the top-right corner of the screen to bring up the menu options. 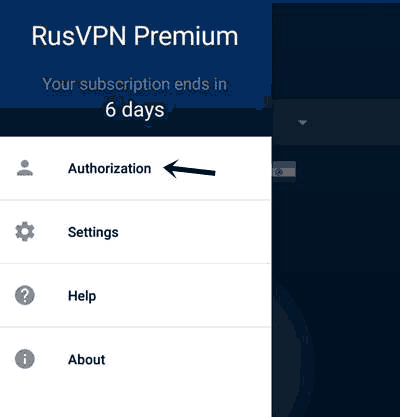 And then enter your login details on the next screen: 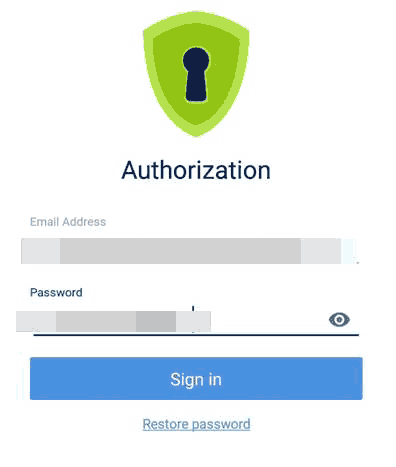 Once done, you should be able to check that the validity for your account has changed from 6 days (the trial period) to your plan’s validity (one year in my case). 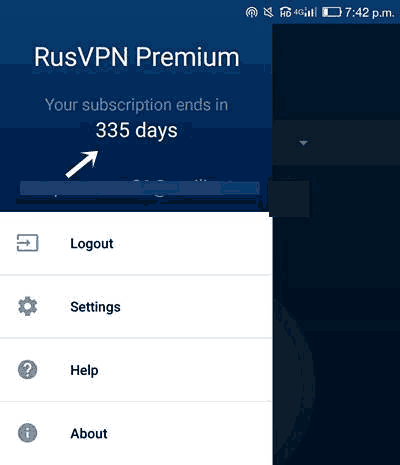 The first thing you’d notice about RusVPN’s user-interface is its ability to be activated using a “Code” in a addition to the E-mail-Password combo. 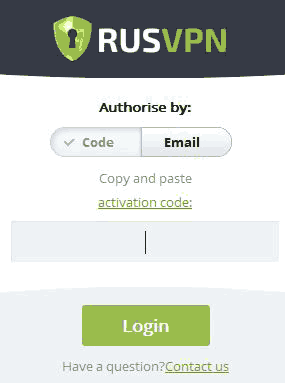 It may not be a major “YAYY!” still is a feature which is unique, and does make logging in slightly easier as compared to the traditional Id-password usage.

Once logged-in, this is the user-interface that the dashboard greets us with: 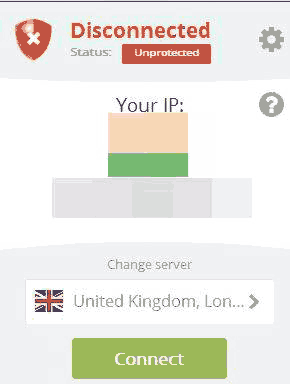 As is evident, it displays the native country, your IP Address, and the change-server option which is where you can click to get a list of all the available countries you can connect to.

The connect button is well-placed and even if it’s your first day with a VPN, and you’ve absolutely no idea what’s going on, you can simply login to your account and click on the “connect” button to connect a different location than your native country.

Then there’s the gear icon on the top-right corner which can be used to access the VPN settings.

Even the settings screen is extremely easy to understand, it has three options: 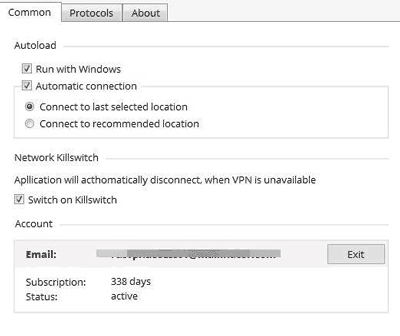 The Common section is what lists the general information for your account and select basic options.

The Protocols is what lets you select the protocols using a single-click; and then there’s the about section which isn’t something most of us use or need to begin with.

Bottomline; understanding or making changes to RusVPN is as easy as it can be, even for total newbies.

The number of available countries and servers is one of the most important aspect when it comes to choosing a VPN; doesn’t it?

Considering how the primary purpose of a VPN is to provide us with new, secondary IP addresses from different countries which allow us the liberty, anonymity and privacy that we seek.

As for RusVPN it lets users choose from as many as 25 countries including but not limited to:

What’s more is that for some countries such as USA, Germany, France etc. the VPN offers more than one servers, meaning more IP addresses and cities to choose from rather than just one.

This reduces server load and gets user the fast speed and browsing experience which otherwise may not be possible if the server was overloaded with all users connecting to the same IP address.

Infact, its country-list displays the amount of load each country-server is currently experiencing, helping users avoid overloaded countries/servers and go with faster ones! 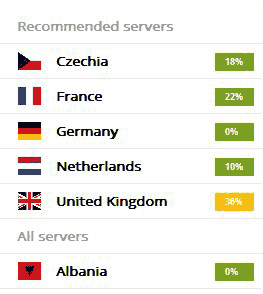 After the country-list; this without doubt is the most important aspect which users do or should consider when choosing a VPN.

The connection protocols define the security, stability as well as the speed of the connection!

Currently RusVPN supports as many as 4 protocols, they being:

If you don’t know which does what, they have an option which automatically chooses the best protocol and that’s what you should go with, or you can go through the following brief descriptions of each and make a decision yourself.

TCP stands for Transmission Control Protocol, it’s used over OpenVPN. It’s a counterpart for the UDP Protocol and is a lot more reliable than UDP considering how it checks each data packet’s integrity and delivery before sending in another packet.

This ensures stable and constant data packet delivery. However this checking process does slow the process down a tad bit.

UDP is like that careless child who only focuses on getting the job done without caring if it’s done right; hence it eliminates the check and verify process; which does make it faster than TCP although obviously some data loss may occur.

L2TP doesn’t have an encryption of its own; rather uses IPSec which is an encryption protocol. Its prime selling-point is its double-encryption or data encapsulation technique, first a PPP connection is established and then IPSec encryption is layered on top.

It’s highly resistant to MITM (Man in the Middle) attacks; although the double data encapsulation does result in a somewhat slower connection.

And finally there’s PPTP which stands for Point to Point Tunnelling Network. This particular connection has been here for over 20 years now! Well; that doesn’t mean it learnt anything over the years.

Meaning, being old it’s one of the least secure VPN protocols in existence. Only to be used when your hardware doesn’t support other better protocols (such as L2TP/IPsec) and when you prioritize speed over security.

Only to be used when your hardware doesn’t support other better protocols (such as L2TP/IPsec) and when you prioritize speed over security.

Obviously it being less encrypted; can provide better speeds than most VPN protocols out there.

Bottomline, RusVPN gets us the options, it has TCP/UDP for general use, L2TP/IPsec when security is a must, or even PPTP which provides just faster speeds for purposes like streaming, feel free to make your choice!

This again isn’t a major “wow” feature, and is common to most VPNs although it’s being mentioned in this RusVPN review here because it exists with this particular VPN as well.

It’s a feature which makes sure the user at all times is protected by the VPN; at times, if and when the VPN connection drops in the background, the VPN severs the internet connection altogether making sure the user is at no times on the internet, without the VPN protection.

The Kill-switch is obviously also available on the mobile version making sure the level of anonymity and privacy on both computers as well as Mobile devices remains the same. 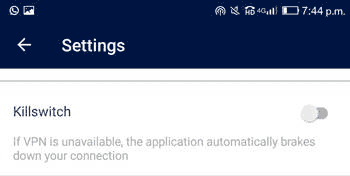 A single RusVPN account can be used simultaneously on 5 different devices, so you don’t have to purchase 5 separate accounts or plans to be used on 5 devices.

Most common households these days have atleast 3-4 Mobile devices in the least, that’s when a feature like this comes in handy, security and protection for everyone at the price of one!

The whole point of a VPN is to provide anonymity; so needless to say a No Logs Policy is a must for any VPN, fortunately RusVPN Does provide it.

It only requires an E-mail ID (which can be anonymous when services such as Protonmail are used) while signing up, except this no IP logs, connection logs or website activities are logged.

Who or on which systems/devices/OS can you use RusVPN? I’d say almost all of them. For starters it supports the following operating systems:

Then it provides free extensions for Google Chrome as well as Firefox browsers, or if you wish to use it with OpenVPN or a router those configuration files can be downloaded off the official website as well.

Don’t wish to install an additional software on your Computers? You don’t need to! The company has made extra efforts to be available on browsers as well!

You can simply go to their Download VPN page to initiate a download for your browsers. Simply choose from Google Chrome or Firefox.

On the popup, simply click on “Add to Chrome”. 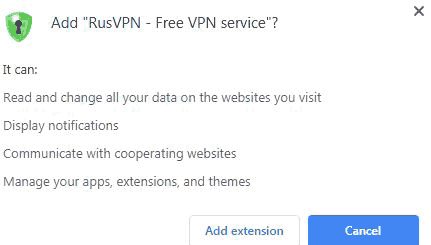 Once installed, it can be easily accessed using the extension icon on the top-right corner of the browser. 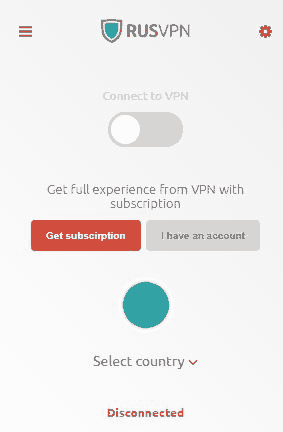 The interface is no harder either; simply click on “Select Country” to choose a country, or access the settings by clicking on the “gear icon” on the top-right corner of the screen.

Bottomline, as far as compatibility goes I’d rate RusVPN a 5/5 for the purposes of this RusVPN review.

The most common accusations VPNs have to face is- They slow down internet speed. Which isn’t entirely false. However the amount of speed-loss each VPN brings with itself is what makes one better than the other.

As is evident as well as expected, there did occur some speed loss, it’s not completely insignificant but I must say compared to some other VPNs I’ve been with, this is still impressive and acceptable.

The browsing and streaming speed didn’t seem effected at all (technically they must have been slower than my normal speed, but the change was microscopic).

Before dropping off my final verdict, let’s take a look at what the VPN charges. It has three plans.

All of these plans come with the same features, the pricing difference is based on the billing-cycle.

The payment can be made via:

So that’s all I’ve got to say for this RusVPN review. Now, is it capable enough for you to entrust your anonymity and privacy to it?

In my personal opinion, yes. Even though it could add couple more connection protocols the available ones are pretty secure. The pricing is reasonable as well as payment methods anonymous. The speed too is impressive.

Bottomline, this certainly isn’t the best VPN out there (yet) but surely has all the right features to be so one day. Anyway do drop your opinion on this RusVPN review as well as what you think of the VPN in general in the comments. 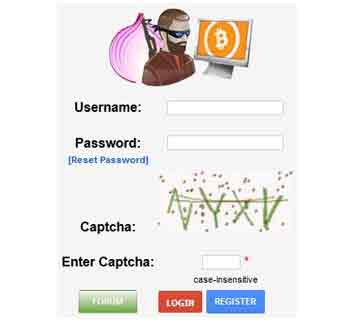