Rocket VPN Review: What are the two things people crave for these days? “Money” (as always), and “Privacy” (Something that we’ve lost in this century!).

Well that’s where this little friend of ours, Rocket VPN might be able to get some of it back to you. (Obviously, it’s a Rocket VPN review, an honest an unbiased one at that!)

Rocket VPN is a VPN, and I’m pretty sure you know what a VPN is, but then again there are a hundred different VPNs out there in the market. And hence this Rocket VPN review had to be broken out of its eggshell to shed lights on what makes it different and unique!

Why do you need a VPN?

Unless you like strangers snooping around every keystroke you make, every website you visit and every message you send online, I’m pretty sure you’d need a VPN!

And it’s not just about “privacy”, the govt. is being more than generous these days on taking care of our “digital protection”, and hence they’ve imposed a ton of restrictions on the Websites you can visit, the videos you can watch and what not. Well with a decent enough VPN like Rocket VPN, that goes away as well.

There are a number of ways a VPN helps you be more secure, anonymous and liberal on the Internet:

This goes without saying, the primary feature any VPN offers is anonymizing / changing / masking of IP addresses, which leads to restriction-less internet access.

Basically an IP address is what determines most of your Internet activity. Your restrictions, limits, freedom, location, identity almost everything is based on your IP address.

Your IP address is provided to you from your Internet Service Provider. It determines your locations as one of its very basic features, and this is the feature that determines everything else.

If a website is banned in your country, in most cases it isn’t banned to “you” individually as a person (unless you’ve been convicted of a federal cyber crime!), instead it’s banned to the whole country, or your region.

So when you use a VPN to change your IP address, the Internet doesn’t know that you’re “not” from where your new IP address is based at, and hence you’re granted access to whatever you’re trying to do.

This is a by-product of the primary feature of a VPN, i.e. changing IP addresses. IP addresses are “location based”.
Meaning any IP address is connected to a server and that server has a real life physical location which also becomes the location of the user.

So when you use a VPN and change your IP address, you actually change your “digital location”. So anyone tracing or tracking you gets your new, “alias” IP address’s location as your location and not your real address.

One of the easiest, fastest and simplest methods to hack into a system? Gain access to its IP address, send over a payload, execute it and you’ve got yourselves a backdoor.

Well, it isn’t that complicated, just concentrate on the first step, “Gain access to the IP address”.
So it’s obvious you don’t want your IP address in the wrong hands now, do you? So using a VPN = getting a new IP address = No one’s hacking into your system, simple as that.

Even when you don’t want to access a “blocked” website or change your location, there are reasons you might consider having a VPN to back you up.

VPNs have a number of connection protocols, TCP, UDP, L2TP/IPSec to name a few. They offer more security and encryption than the general internet traffic does.

What this basically means for you is that, everything you do online, even the legit work will be better protected.
It won’t be intercepted by any third party, be it a national cyber spy agency, or just some highly skilled hacker trying to get a hold of your digital life. 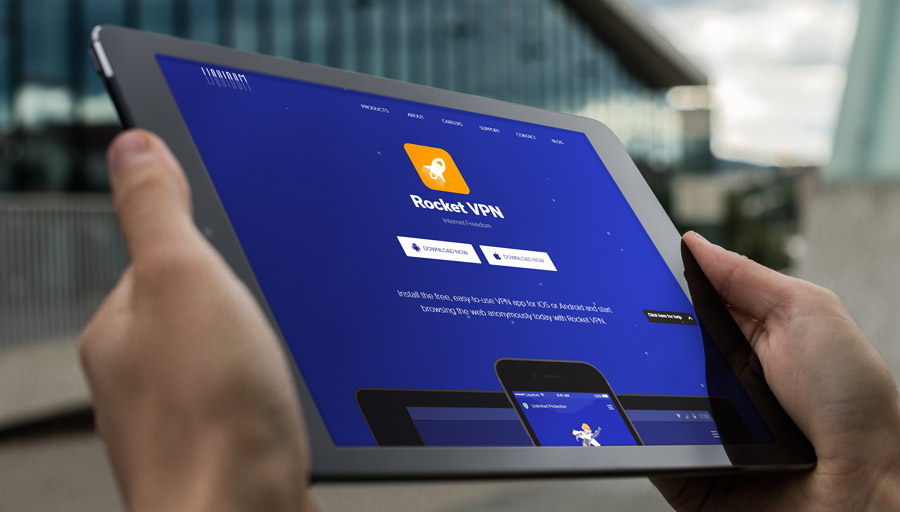 AS you might have guessed, Rocket VPN is a VPN for Android as well as iOS. Well it’s just not any VPN, infact it has been specifically crafted for “Cell phones” and that’s what makes it unique. (In addition to other features like an inbuilt Browser, apps unblocker and multiple locations support!)

But that’s not all, there are other superpower it boasts of, so let’s take a closer look: 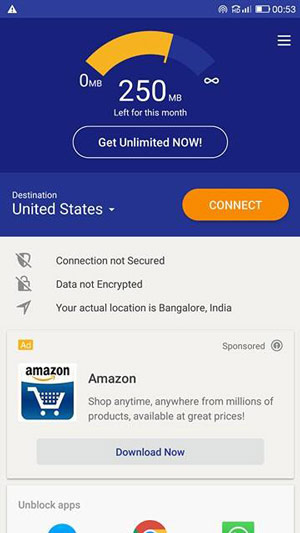 The first and foremost I’d like to bring forth in this Rocket VPN review is the extreme ease of interface and user friendliness that Rocket VPN offers.

Generally, the VPNs I’ve been with aren’t as “friendly”, they are power packed no doubt but it takes a decade just to figure out which button is where and what it does.

That’s not the case with Rocket VPN! Once downloaded, there’s a neat interface which has a Connect / Disconnect switch.

A tap is all that’s needed for you to get totally invisible to the darker forces of the Web-world and connect to the VPN.
The top section shows how much data is left on your plan and the section below it shows you your connection details such as location and security. There seriously is no high-tech skill set required to understand or use Rocket VPN.

When you download Rocket VPN, you get a free allowance of 250MB of usage. Normally a premium app like this should charge you a fortune, but Rocket VPN doesn’t. Consider it a trial allowance, something to establish your trust in the app.

And this limit is automatically renewed every 30 days as well! So you don’t have to pay a penny if you’re happy with just 250 MB of anonymous data! 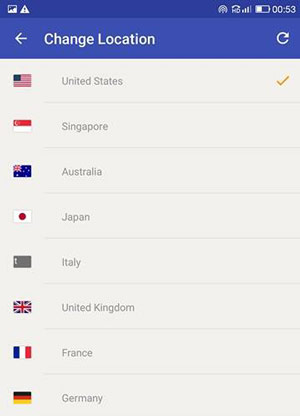 Rocket VPN supports as many as 8 different countries for you to connect to. So doesn’t matter which part of the globe you reside in, just with a single tap you can virtually be in any of these 8 mentioned countries. 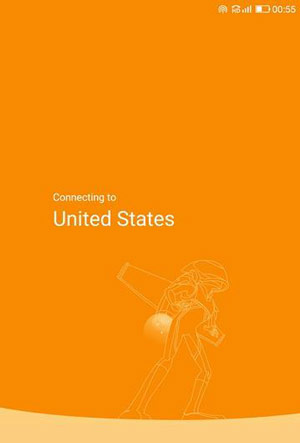 Once you tap on any location, you get the “connecting” screen as shown below. Well in my previous experiences with other VPNs (specially smartphone app versions!), the connection time itself was pretty unbearable.
While it took me exactly 3 seconds (yeah I measured) between taping on the connect button and actually being connected. I’d say that’s a pretty big go-sign for me. 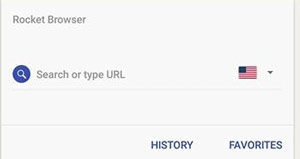 Rocket VPN even has an inbuilt browser of its own, which makes it extremely easy for you to unblock any website you want to visit.

Basically it eliminates the need of you to do anything. One of the prime motivators which led me to write this Rocket VPN review to be honest.

The browser has some cool features of its own as well, it let’s you import bookmarks, or even change locations from within itself!

Just connect the VPN, and search for any keyword or enter the URL of the website you wish to visit, and voila it would pop right up without any problems!

Obviously you can use any other browser to visit those blocked websites as well, but using Rocket Browser just grants you an additional level of security, because “Google” didn’t vow to protect your privacy, but Rocket VPN does! 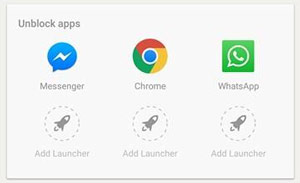 Just below the rocket browser section you can spot a section for unblocking apps. If there’s a certain app you are unable to access due to restrictions, Rocket VPN should be able to unblock it for you.

It detects most “security conscious” apps by itself and shows them to you, but there are options which let you add other apps of you own to the “unblock” list in case the apps aren’t pre-listed.

The best part? It supports “multiple locations” all at once! Meaning if you need your app A to use “USA” as the location, app B to use “France” and app C to use “UK”, it’s all possible.

You don’t have to choose one specific location for all the apps, instead of all them can have their own locations, another unique, exclusive, motivating and guiding force towards the birth of this Rocket VPN review.

VPNs cause speed losses. And that’s a truth (in most cases, just not this one!). I’ve used like a dozen VPN programs in my life before writing this Rocket VPN review, and I can testify that they do slow down the internet.

But I noticed no such discrepancy with Rocket VPN. So I used Ookla to measure my speed, and to be honest I did notice a bit of speed fluctuation, but that’s only because I checked so deep. On the surface level, I would have never noticed that my connection lost even the least bit of speed.

So unless you’re a stickler for statistics, I’d say Rocket VPN is honestly one of the fastest VPNs I’ve come across. (Although I’ve not measured the download speed yet.)

So that’s pretty much what I had to say as far as this Rocket VPN is concerned. I’m sure those superpowers speak for themselves and I don’t need to tell you what you’ve got to loose or gain by going (or not going) with Rocket VPN.
Now for those who are a bit more curious, let me have a brief section on how exactly Rocket VPN works! 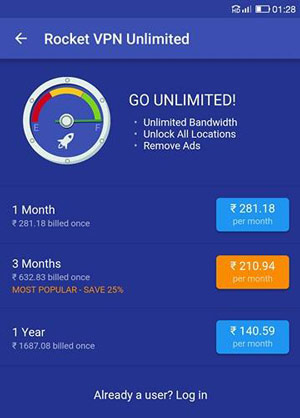 Once you’ve exhausted your 250MB free monthly allowance, you can go for premium plans well. And trust me these probably are the “cheapest VPN Plans” in whole of the industry (I’m not saying this just for the sake of this Rocket VPN review, as you’ll soon see!)

Their plans start as low as:

Seriously a VPN with all these features, at Rs 140/month (which makes it as low as Rs 4/day!) is definitely underpriced!

How does Rocket VPN Work?

Just because this is a Rocket VPN review, and I’m saying “It’s a great tool, it hides your IP, makes you anonymous” and what not, doesn’t mean you should blindly believe me, right?

So let me walk you through the “behind the scenes” of how all the so called “magic” happens (just to help you understand that it’s pure science and no magic, and it actually “works”!)

As I said, every cell phone (or computer) uses an IP address to connect to the Internet. This IP is like your cell phone number, it’s registered to you by your ISP and can be used to trace back to you in the real world.

But when you use a VPN, the VPN assigns you a secure IP address of their own, which then is used to connect to the Internet. (It’s encrypted as well, hence all the more security to you!)

Is a VPN Invisible?

A common misconception with VPNs is that they make the IP address “invisible”. Well, they don’t! When you use a VPN, the IP address you’re using is 100% visible, it’s just not the “real” IP that’s visible instead the alternative, VPN-provided IP and it doesn’t lead back to you.

So that’s a wrap up for this Rocket VPN review folks.

And now if you ask me for my final verdict, is Rocket VPN worth it? I’d say why not? It offers some of the “never before” features like inbuilt browsers, app unblockers and FREE DATA as well.

And even if you’re going for the premium plan, their prices are cheaper than what I spend everyday on my snacks. I’m pretty sure our “security” and “privacy” are more important than our packets of chips and coffee.

Do let me know your take on Rocket VPN in the comments. It’s always great to get a bite of your brains. (Not literally, it’s just a phrase!)