When we first did a Netgear Nighthawk x6 review back in 2014, this was one of the most expensive routers in the market, right now it’s priced lower, and many other more-expensive routers have come out.

But when it comes to features, there isn’t much you’ll be missing out with this one, and in this Netgear Nighthawk X6 R8000 AC3200 router review I’ll also be sharing my own experience and results of using the router in 2017.

Before taking you on this journey of the Netgear Nighthawk x6 ac3200 let’s glance over the specs being offered.

So well that’s a pretty long list of specs and features that the Netgear Nighthawk X6 R8000 AC3200 offers, let’s dig in deeper.

It comes only in black, and looks somewhat like a crab with its antennas extended out. The lights however instead of being panel on the side of the router, are positioned on the top of it.

The “Grills” provide it somewhat premium look, if you’re into those kinds of things.

This is one of the most advanced WiFi standards in existence, it’s the successor for the 802.11n standard, and just for the record, the Netgear Nighthawk x6 supports them as well.

It’s (the AC standard, not the router) supposed to have a maximum throughput of 1.3Gbps in a perfect environment although that’s not the real-world speed as I’ll soon reveal.

So, the router offers three WiFi bands to start with, a single 2.4Ghz, and dual 5Ghz bands.

In case, you’re not aware, the 2.4Ghz is the most common band, used by nearly all the common household WiFi devices such as Bluetooth, radios etc.

Hence, it has a good enough range, a wider range as compared to the 5Ghz band, but because a lot of other devices are also on the same band, it encounters a lot of resistance and interference, due to which it’s not as fast as 5Ghz.

Anyway, the theoretical throughput on the 2.4Ghz band is 600Mbps while that on the dual 5Ghz bands is 1300Mbps each, which adds up to a total of 3.2Gbps.

Although, during our actual speed test of the Netgear Nighthawk X6 R8000 AC3200 router we found that on the 2.4Ghz band, at a distance of 5ft. The actual throughput that could be achieved was 98Mbps.

Just in case you’re skeptical, that is impressive, compared to most other routers such as the Asus AC68U which generally rival the Nighthawk.

Even its 802.11n band didn’t disappoint me with nearly double the speed, i.e. 180Mbps at a distance of 5Ft. Compared to the AC band.

As far as range is considered, the 2.4Ghz band got us a maximum range of 168ft. Which might slightly vary according to your building structure and environmental conditions.

Another point worth mentioning here is that, like most other tri-band routers, the “third band” or spare 5Ghz band only comes in action when you have a hoard of devices connected to your router so it doesn’t make a lot of difference if you have 8-10 or less devices connected.

When it comes to customization option and controls, they could certainly use some improvement, especially on the 5Ghz band.

For e.g. you can’t “force-change” the channel being used by the band, and both the 5Ghz bands use pre-defined channels, which even though is a safety precaution to prevent intra-band channel clash, might prove to be problematic if there’s a lot of traffic on that same channel in the neighborhood.

Bottomline; as far as speed and range are considered for this Netgear Nighthawk x6 ac3200 router is that it might not be the fastest router, but it’s fast and the range isn’t great but is still decent.

And as for controls, it’s acceptable but an upgrade wouldn’t hurt.

We were just talking of bands and frequency of the Netgear Nighthawk X6 R8000 AC3200 router, and Smart connect is totally related to that.

Smart connect is a feature which automatically connects your devices to either the 2.4Ghz band, or any one of the dual 5Ghz bands.

It does it on the basis of traffic, speed and a number of other factors. Basically, you don’t have to do so manually.

It helps keep the connection speed optimal by making sure the right devices are connected to the right bands. Hence the slower or older devices can’t dominate or take up the bandwidth intended for newer, faster devices.

Although not an exclusive or a truly “wow” feature, it’s still a feature and hence deserved mention in this Netgear Nighthawk X6 R8000 AC3200 router review. 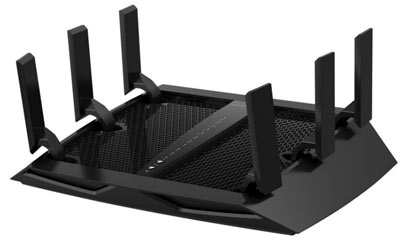 It has really done itself over with its antenna designs, just like most other router antennas, these are external, but unlike them, these aren’t removable.

But, these can be “folded” all the way inside or outside the router, hence making it compact, re-sizable (140degree) and easy to install.

Anyway, they help the router expand its range and increase its speed. And the decision of providing the router with 6 instead of the general 4 antennas is a great one as well.

Beamforming is one of the primary features I look for in any router review I scribble down.

It’s basically an advanced technology which detects where your devices are, and sends the signals directly in that direction, rather than scattering it all around the place.

First of all, it increases the speed and strength of the connection because the router is aware of the device’s location.

Secondly, in home-environments where cell phones and laptops are moved constantly, it helps not lose the signal as the router again finds the location and sends the signals there instead of you having to adjust your location for the speed.

Bottomline, it’s a great feature, and one of my favorite things about this router as a whole.

It’s not just the software that the Nighthawk is good at, the hardware too, if not more, is in no way less than its contemporaries.

There’s a 1Ghz Dual core processor to begin with, enough to handle all and any kind of tasks you throw at the router.

Then there’s a 256MB RAM which makes sure all the tasks such as copying/transferring files/connecting to other external drives or anything else isn’t lagged up and runs smoothly.

And the flash memory too is more than enough as far as routers go.

So in a nutshell, it not only handles all router-tasks well but also advanced changes such as custom-firmware upgrade.

My verdict for its hardware as far as this Netgear Nighthawk X6 R8000 AC3200 router review goes is, it’s what I expected, and you too will be satisfied if not overwhelmed.

Like any other router at this price-range and with these features, the Netgear Nighthawk X6 R8000 AC3200 too has incorporated itself with 5 Ethernet ports.

4 are dedicated to LAN, and 1 to WAN. The ports can be used to get high-speed wired connections from the router.

As for USB ports, there’s one 2.0 and one 3.0 port. Although there’s no E-Sata port like later Netgear routers, still the 2.0 does the job just fine.

These ports let you connect the router to a printer, hard-disk, or any other supported media and transfer/browse files across the devices.

The Netgear Nighthawk X6 R8000 AC3200 is all armed to the teeth to make sure your connections and traffic aren’t compromised in any way.

It does support VPNs to begin with, so you can configure it with your virtual private networks for added security.

Then, it encrypts its connections using all the encryption protocols generally available, which include them all from WPE to WPA-2 Enterprise.

Stateful Packet Inspection (SPI) is an advanced algorithm which keeps checking your connection and traffic against known patterns, type, load and a lot of other things known to be used in hacking attempts.

And finally, Network Address Translation makes sure all the devices on your router are using a single IP address.

Less “technically secure” features include Parental controls, and time-based connectivity limits for each device. Adult content, specific websites as well as  “level-based” offensive content can be blocked as well.

Again not an extraordinary, but a feature, all the same is the router’s guest-network. It gives you the ability to create separate accounts, on all three bands.

These provide access to your guests, but it’s limited so they only get the “internet”, and not access to networks or files.

Netgear routers (most of them) allow setting parental controls. Let’s start with the filters. These can be set for each family member depending on his/her age. There’s no one-filter fits all now, is there?

Or, you can “Pause” the internet connectivity on any device at any time. Don’t like your kids Netflixing on the dining-table maybe? Specific “off-times” can be set as well, when the Internet turns off automatically at the pre-set time.

Moreover, you can set specific websites to be accessible only at specific times of the day.

Obviously a detailed history of all the visited sites by each devices is accessible. You can also specify exactly how much time each device gets on each app/website per day. Usage reports too are available.

The router markets itself as an ideal product for gaming and streaming. Parallel to the same, it offers the ability to prioritize devices and applications for bandwidth.

In other words, if you’re gaming or streaming on a device it can be prioritized to get better speeds. This makes sure regardless of the number of connections to your router, this prioritized device doesn’t lose speed or quality.

This deserved to be mentioned individually considering the lofty price-tag that the router comes with. MU-MIMO stands for “Multi-User, Multiple-Input Multiple Output“.

In the simplest possible words, routers which support MU-MIMO can serve multiple devices at the same time and deliver a much better performance ,as compared to routers lacking the feature. Basically, the signals from a MU-MIMO router are served simultaneously to all the connected devices.

Each household which can afford the NightHawk x6 R8000 will have atleast 5-6 devices in the least. Considering the times we live in it’s safe to assume most of those devices will either be streaming videos, or playing online games. Both of which are pretty bandwidth-demanding tasks.

In such a case, the lack of MU-MIMO may be an obstacle and the devices may face buffers, lags, high pings while gaming if there are other devices on the network demanding similar bandwidth.

Note that the router can still connect to as many as 64 devices in total, and performs really good as well. It’s just that MU-MIMO would’ve made things even better.

So, let’s just wrap this Netgear Nighthawk X6 R8000 AC3200 review up.  Here’s what I think of the router personally.

It’s not the fastest router, but fast. Its 3rd 5Ghz band isn’t useful unless you connect a lot of devices, if you don’t, the throughput is equal to any other AC1900 router.

The speed and range are more than satisfactory, although they may not be as good as other routers in all the cases, but they’re good.

Although it might not be the best choice if you’re thinking of high-res gaming or 4K video streaming, otherwise, for most other tasks it’s totally worth every penny.

So bottomline, it’s well-balanced when it comes to pricing, the hardware too is more than enough to handle most router-tasks, so yeah feel free to go for it.

That’s all, I’ll stop scribbling now, do let me know what you think of the router and of this whole review as a whole.

Are you still looking another VPN router for your home or business then you may try to read below-given blog posts.