This Icarus Market review will discuss all the products, security measures, shipping details and other features that the marketplace brings with itself.

Also, Icarus Market is probably the newest marketplace we’ve ever reviewed. So, we’d urge you to not compare this Icarus Market review with some other more established marketplaces out there.

No, we aren’t asking you to start using Icarus Market for any legal, or illegal purposes. You may register on the marketplace, take a look around and form your own opinion regarding the marketplace.

Again, we’re neither for nor against the marketplace. We’re just going to be as honest and transparent as is possible throughout this Icarus market review.

We’re answering the following questions throughout this piece:

Let’s get started with this Icarus Market review then?

As mentioned earlier, Icarus Market is a pretty new marketplace. In fact, it was launched on April 5th, 2020.  Here are all the primary features that the marketplace is made up of:

Pros and cons, well, every darknet market has them, and the same holds true for Icarus Market as well.

The marketplace despite being extremely new to the grounds, doesn’t have a lot of red flags. The number of products has a constant growth, vending-policies aren’t aggressive, and it accepts multiple cryptocurrencies.

The security measures too are almost all there. Sure, the addition of multisig transactions would make things better, but the available regular escrow isn’t all that bad.

It’s not completely perfect though. Not only it’s not wallet-less, but also has specific minimum-deposit requirements.

However, overall, we can only speculate and say that it totally has the potential to be one of the leading names in the industry. But well, only time will tell.

That it does. In our opinion, registration helps users manage orders, payments and communications better than those marketplaces which do not require registrations.

And as long as the registrations are free, do not require an invite and are anonymous they’re pretty acceptable as well, just like on Icarus Market.

Here’s the registration form that needs to be filled in order to join Icarus Market:

If you ask me, yes it does ask for more than just a username and password, unlike some other marketplaces.

But then again, the PIN and personal phrase are there only to make the account more secure.

As for the “currency-selection” goes, it’s actually a useful feature not many marketplaces offer. On Icarus Market, we as users can select on registration the currency we’re most familiar with. This currency is then used to display the prices of the products instead of cryptocurrencies.

Note that this currency can’t be used to make payments. It’s only used to display the prices of the products. Payments are still only accepted in cryptocurrencies (scroll down for details). This currency can also be changed later and isn’t permanent.

In a nutshell, the registration is mandatory.

What products are and aren’t available on Icarus Market?

If you’ve been with any other Darknet Market before, you already have had a glimpse of the product-stock on Icarus. It does nothing different or non-traditional.

The products start with the most popular category “Drugs”, followed by “Fraud”, “Digital Products”, “Software and Malware”, “Counterfeit items” etc.

What’s surprising is, Drugs is NOT the most product-rich category on Icarus (yet). Rather, Digital Products dominate the product-listings as far as quantity goes.

Digital Products boast as many as 152 listings currently, while drugs follow close by with 134 listings. However, we’re confident drugs will soon overtake the lead “Digital Products” has.

Some other available categories include “Security and hosting”, “Services” etc.

We’ve designed a graph to help you understand the product-stock better: 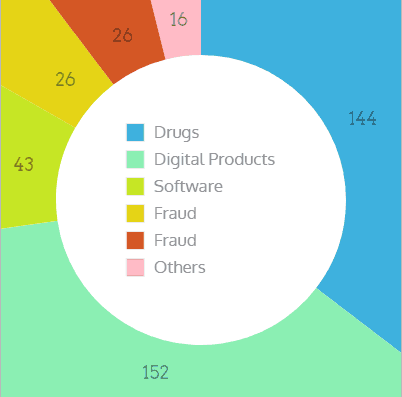 As for the products which “aren’t” allowed, we found only two restrictions in the vendor-application; these being:

Talking of vendor-application, let’s address the vending rights on Icarus. Well yes, it does accept individual vendors who have the right products for the marketplace.

The general vendor-fee costs $100.00. Note that we termed it a “fee” and not a “bond” as we generally do. That’s because this fee is “non-refundable”.

However, considering their novelty they recently scrapped the fee for established vendors. Vendors can open a ticket, and apply for the free accounts. Obviously, only reputed vendors get these free accounts, for which PGP-authentication is required.

The only restrictions for vendors are that they’d not be allowed to sell the restricted products mentioned earlier. And, they can’t ask for F.E without permission, threaten buyers or Doxx the marketplace.

*These are set during registration, as shown earlier.

The secret phrase is nothing unique or exclusive per se, however not every marketplace offers this. It’s like an identification-phrase, something known only to you and the marketplace. 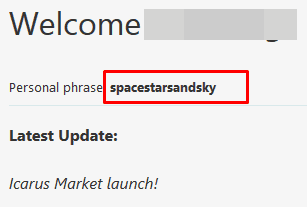 Once set, this phrase will always and forever be displayed on a user’s dashboard. This tells them that the marketplace URL is correct, and is not a phishing attempt.

So the security PIN is a 6-digit PIN which is required to make withdrawals, or major changes to the account. E.g. it’s used when enabling/disabling the 2-FA.

It’s mandatory for vendors on Icarus Market to have a PGP key on their profiles.  Additionally, the PGP is also optionally used to enable 2-FA on user-profiles.

Another titbit we’d like to add is that on the user-dashboard the marketplace actually shows the activated/not-activated security features. Just a better overall glimpse, and a reminder to strengthen account security. 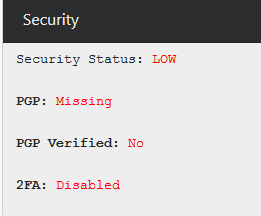 So let’s just say that there’s nothing “impressive” with the security features, it’s just what most serious marketplaces offer. Bottomline, the marketplace seems pretty secure.

What are the payment modes on Icarus Market?

Again, as mentioned in the earlier sections of this Icarus Market review, payments can only be made in cryptocurrencies. But you already knew that, didn’t you?

As for the exact cryptocurrencies the marketplace accepts, those are:

Bitcoin because it’s arguably the most anonymous and well-established coin. Also because it’s the legacy coin in the Crypto-world.

Monero because it promises to offer equal, if not more anonymity than Bitcoin. Personally, we’d say these two options should more than cater to the needs of most Dark web enthusiasts.

The one unfortunate aspect of Icarus Market is that it’s not a wallet-less marketplace. In other words, it requires advance deposits to a centralized marketplace wallet.

This increases the chances of third-party hacks, marketplace exit-scams, and overall risks.

Also, there are minimum deposit-requirements for each coin. For Bitcoin it’s 0.0007 BTC, and for XMR it’s 0.2 XMR. In the real-world however these limits don’t make a lot of difference. There almost is no product available which costs less than the minimum required deposits.

And on the brighter side, it totally allows withdrawals so that’s there.

All in all, I’d say there’s considerable margin for improvement with the marketplace’s deposit policies.