Hideman VPN Review: If you’re on this page and you’re looking for a VPN, I won’t even ask you why. This is the 21st century we live in, where you can’t have your food without 10 CCTV cameras watching you, so I don’t think taking care of your digital life comes even close to being paranoid. I’d just call it a natural right.

VPNs are a lot of times wrongly accused of the wrong reasons, like being associate only with hacking or illegal things of that sort. Well I don’t call protecting my privacy “illegal” even if the govt. might say what it likes.

So I’ve been with quite a number of VPNs by now, and it’s not every day that I come across one I feel like sharing out with you. But this one? It does! It has a free version too, so worry not no one’s asking you to empty your pockets out.

Well let me be honest, yes this is a review. A Hideman VPN Review, and yeah I’m trying to sell it to you, but considering the  fact that you already are looking for a VPN and you already are on this page, do invest your next couple minutes over in this article and you might just end up making the best investment of your digital life. (Or just go with the free version!)

And nope I’m not asking you to go with Hideman VPN application just because I’m saying so. Just go through this review, checkout the features and what it offers and then decide for yourselves if you want it or not.

So let’s start with the basics.

What are VPN and Why You Need One:

So as you already know, a VPN is a Virtual Private Network. Basically in simpler English, it’s a set of IPs you can use instead of the one provided to you by your ISP.

How a VPN works is, you connect to your VPN with your IP address, and then your VPN gives you a new set of IP address off a remote location which you can use. That way, it seems to whoever’s spying on you, that you’re based off that new location (IP address) and your real IP address remains masked.

Now why that’s important is because, your IP addresses can be traced back to you, to your physical location and to your names in some cases, so it’s obvious why you might want to hide it.

Another major use of a VPN is if you’re among one of the Deep/Dark web enthusiasts. Now the “Dark” web is completely illegal so I won’t even talk about that,   but the Deep web is just full of conspiracy theories, some govt. documents and things of that sort which isn’t actually harmful, but the govt. of course doesn’t want you snooping around, so a VPN might come in handy.

Hiding your location and accessing the deep web aren’t the only circumstances you use a VPN for. A new-found problem of “restrictive websites” also enjoys VPNs as its solution.

Basically since the last decade, country governments are starting to ban more and more websites due to political agendas and feuds. I mean what harm can Google and Facebook do, right? But they won’t understand it. So of course you need to bypass the country restrictions and access the websites? Just install a VPN, and you’re done!

So okay I won’t go around chatting anymore, I understand that the “importance” of VPN is more than clear to you by now, right? Let me review it for you in real time! Meaning I would download it right now, and walk you through the features and details in real time in this Hideman VPN Review.

Hideman is a VPN, it’s good, secure and the best part? It has a free version too. (Of course there are limitations in the free version.) 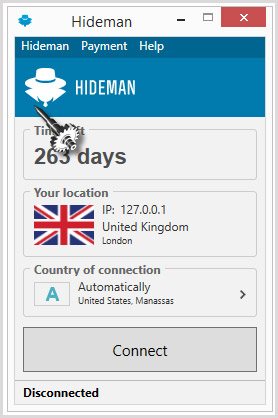 So I’ll start with the very first step, the downloading of the VPN. When you’re on the download page, you can see it supports almost all the major operating systems out there. Be it Windows, Mac, iOs and even android.

So you download the version that you need. I’m going with the windows version.

It’s an application which is less than 3MBs in size! So not a lot of data wastage either, and you can already imagine how small amount of resources on your system a 3MB application would use, right?

Also the installation was pretty simple and the typical “next-next-next” types, took less than 10seconds. So yeah I’d say we’re starting off on a great foot. 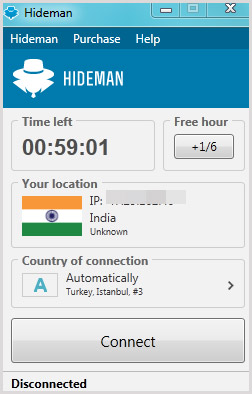 So once it’s installed you’ll get a screen like this.

Now as you can see, the first box shows how much time I’ve left with my Hideman VPN and the box right next to it is probably my extra free hours. Anyway that’s not a “feature” so don’t stress too much over it.

The second box down the line is showing my current location with a country flag just to make things clear.

And the third box is where the real magic happens. This is where you get to choose the country you want to connect to and be “virtually” present in.

Although only 8 countries and 12 server options are available in the free version. If you want more countries, you’d need to buy the product. 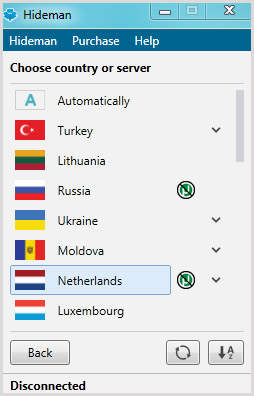 Connection Speed:- It took me roughly 4 seconds to connect to my location which I chose to be Netherlands. So I’d say the connection time is a 5/5 no doubt. (Trust me I’ve been with VPNs which need minutes to connect to a server.)

A common misconception around VPNs is that they slow your internet speed down. And well most of them do too. So let’s see what’s Hideman’s performance. 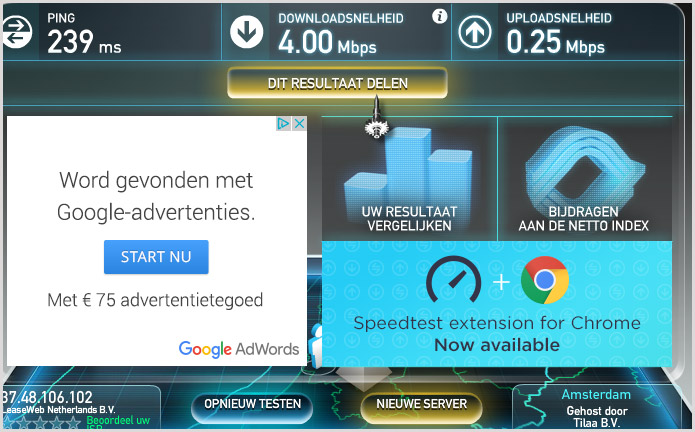 Wow! I’m in India and over here 4mbps at my location is just as good as it gets with or without the VPN. So my verdict? It didn’t affect my speed as far as I can tell.

The connection process if you ask me is fairly simple. You run Hideman VPN, you choose a country, you click on connect and done. No rocket science needed.

So I’d say it’s a 5/5 for user-interface. And given the list of countries and servers available, I might even add an extra 1 point if you allow me.

The settings option at the top-bar is rather helpful too.

The general settings is well “general”. As you can already make out what the options mean, I won’t get into details here. It just lets you control how you want to app to react and interact with your machine. Nothing complicated. 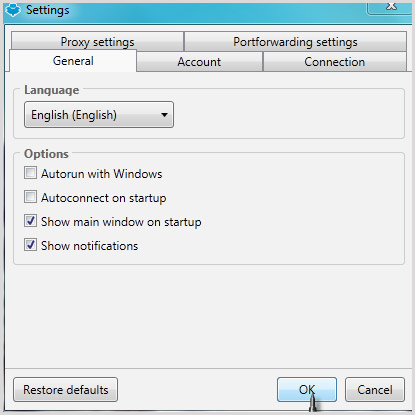 Then there’s the “Proxy” settings. In case you don’t want to use the default proxy and want to assign a manual one, this is where you do it. Basically anything related with the proxy goes through here.

The “Accounts” Tab too is nothing special. It just gives you your account details, and the option of linking your account with other accounts. This is indeed a “feature” but I’ve got better things to boast of than this.

This is the “boast about” feature I was talking about.

Now with a “Free VPN” in most cases, I don’t expect this much control of even existence of features. Most free VPNs just let me connect to 2-3 different set of IPs and that’s it.

But Hideman has this connection settings which offer you a variety of features even on the free account. 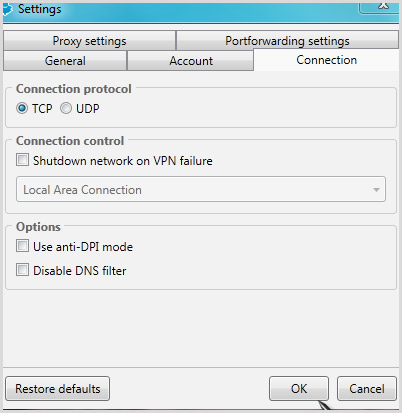 TCP:- In case you don’t know what that is, TCP is one of the safest and most reliable connection protocols available. It’s the abbreviation for Transmission Control Protocol.

Basically the internet is nothing but streams of data. So what TCP does is, in order to communicate with your target website/server or whatever it sends a data packet, waits for a positive-negative response from the receiver’s end, and then sends the second data packet on a successful connection, or re-sends the last data packet until it’s received.

That’s what makes it more reliable. It also makes it slower compared to UDP so which protocol you should be using actually depends on the kind of website you’re trying to access.

UDP:- UDP is the counter-part of TCP, the abbreviation for User Datagram Protocol. I think you’re already getting the idea about how it functions.

But this makes UDP a faster connection protocol because it doesn’t have to wait for response from the other end.

We don’t need them. So bottom-line? These two are the most widely used connection protocols and are more than enough to suffice your needs.

This one’s a life saver. Let’s say you’re on the deep web. Or some other place on the web you shouldn’t be, and suddenly your VPN connection drops due to the hundreds of potential reasons out there.

What happens if you do not know of it? You’ll leave a trail leaving directly to your doorstep.

So that’s where this feature comes in. What it basically will do is, if your VPN connection is dropped, it will automatically shut down the network hence keeping your privacy intact.

The DPI basically stands for “Data Packet Inspection”. It’s a pretty complicated process to be honest, but I’m sure you’re not here on a “teach me the internet terms” class so I’ll keep it simple.

Basically the Government and “Internet authorities” so as to say monitor our every move, every website we visit etc and they do so by prioritizing data streams on basis of Spam, Malware, Virus, Okay site, not okay site etc. (The list goes on);

So what you need to understand is, your govt. might have blocked access to specific websites in your country, or it might just be spying on you in general. Enabling the Anti-DPI mode would make it hard for them to track you down. (I won’t say “impossible, because hey it’s the government.)

Another one of those advanced features you get even with the free version of Hideman VPN is the disabling super-powers of the DNS filters.

I’ll try to be as simple as possible. Many times your DNS server blocks the access to certain websites. With the “disable DNS Filters” feature, you’re able to bypass that block and access just about any website you’re trying to access. Simple huh?

Now you must be wondering what this super-tool would cost. Because the features I’ve shown you are totally worth my money at least.

So hey the plans start as low as $9/month for “All devices / Ultimate Plan”, and if you want it specifically for your mobile devices, they can be cheaper than your monthly cost of coffee, that’s around $2.9/month.

So okay I’ll sum this Hideman VPN review up.  if you ask me if I’d pay for Hideman VPN, I’d say yeah totally why not! The connection speed, the list of countries and servers available, and the advanced settings everything is screaming for it.

I don’t see a reason not to. I mean I found all the features I was wishing for, right? And at this price? $3? It doesn’t even matter! But hey I understand some of you might be the skeptical kinds, for those of you all I can say is, go out and try the free version of Hideman VPN right now, it won’t cost you a dime!