Empire Market, the Deep Web marketplace for anything and everything that exists on the Deep web just announced their latest security and features update.

It includes strikingly similar interface and layout as Alpha Bay market along with the same advanced features, which include but not limited to:

For users lamenting the death of Alphabay, Empire Market seems to be the next best solution considering how it’s almost exactly the same thing as users have reported so far.

Empire Market in its short days of existence has gained quite a few established vendors from other marketplaces who seem to be loving its Alphabay-alike layout and security features.

Its tagline- “In memory of Alexandre Cazes” clearly indicates Empire Market’s intention to honour and mirror the memory of the late Alexandre Cazes, the founder of Alphabay itself, who at the time of his death was worth well over $23million according to his own estimates.

Just like Alphabay, it too has a profile section on the top-left corner of the accounts, which displays nearly all the information that a user account has, which includes Joined date, trust level, total sales, and total orders.

Just below that, again mirroring Alphabay is the “Categories” section which is designed to help Empire Market users narrow down their searches, save time and find more accurate products.

Empire Market also has embedded a Search box, again similar to Alphabay with the intentions of letting users key-in their desired product queries and find the products.

The Search box didn’t disappoint ex-Alphabay users as it too is crafted with the ability to let users filter their searches for the most basic point.

Even the bottom-right corner of the page as released to the media and press is shown to have the “exchange rate”  as the public had previously seen with Alphabay.

The only difference seems to be in the case of the Logo, while the AlphaBay logo was an “A” centred in a double-boundary circle, the Empire Market logo as of today is a “Yellow crown” which seems to signify the name of the marketplace.

Empire Market aims to grow its already growing categories and number of products with the help of new sellers on the platform and it has taken quite a few steps to ensure that happens.

The process of joining Empire Market is exactly alike Alphabay’s joining form, and can be completed in minutes if not seconds, without the need to divulge any personal or implicating information such as real names, real E-mail Ids or anything else.

The vendor acceptance program too is strict as reported by its current vendors, and needs a $100 bond which is refundable considering the account is in good standing at the closure point.

Along with Bitcoin, Empire Market also has started accepting and letting users trade with Litecoins, and are reportedly going to bring in more currencies (Monero is sure to be integrated among other unnamed coins) with time.

“Don’t worry, we will be integrating XMR as well”- Founder.

The intention for the inclusion of these other alt coins was clearly to provide more options to users, along with the reduction in the transfer fee, which otherwise is sky high with Bitcoin.

They also seem to facilitate withdrawals to Segwit addresses and not just the legacy ones.

One of Empire Market’s latest includes is its Auto-dispatch feature, which as per the Administrator is designed to “automatically dispatch” digital products.

Digital products here mean goods such as Ebooks, tools, accounts, and anything else which can be delivered digitally without needing any physical shipment.

Although the team’s direct statement was “It’s not a fully featured autoshop, but it’s the next best thing for big digital goods vendors while they wait for fully featured CC & Accounts autoshops”.

What this tells us is that the auto-dispatch would still need some manual activity on the part of the buyer and vendor.

The second part of the statement indicates that they soon will have a completely automated “CC and accounts” autoshop, which should facilitate instant, real time dispatch of credit cards and accounts for buyers.

As for security, they have amped up their fortification with PGP encryption for both Bitcoin as well as LTC addresses, which helps users verify the authenticity of the real Empire Market’s address and keeps attacks such as Phishing site, or mistakes such as wrong addresses at bay.

The mandatory rule of requiring all vendors to have a PGP encryption key further adds to its security.

2 Factor authentication is available as well, Empire Market uses PGP keys to offer the 2-FA verification just like Alphabay did.

Additionally, they also have a 6 digit PIN in action, which is required while enabling 2-Factor authentication or while making any other serious change to the account.

And finally a 9-word mnemonic code acts as a master key, and recover user passwords should they forget it. Obviously in cases when this Mnemonic code and password both are lost, neither can be recovered.

From the current scenario of the platform, it can be concluded that they have done some legit efforts to be the next Alphabay, or even better.

The features at least are identical, and in some cases more advanced. Also because of the extreme similarity between the platforms, new users will not face a lot of problem while on Empire Market.

As a part of this press release, we would urge you to share this with your friends and on social media and get Empire Market the attention that it deserves.

Also I personally would like to know your take on Empire Market, its features, layout, along with every good or bad vibe that you may have gotten off the platform.

In my personal opinion, with time when the platform grows with enough vendors and sellers it does have the potential to be one of the top deep web markets out there, especially because of the security precautions it has taken for its users. 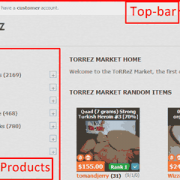