Dream Market Shutting Down? Unable to register on Dream Market? Unfortunately the answer to both of those questions is- Yes.

Amidst  huge shock the most popular, widely used and arguably also the most successful Darknet Market  in the industry Dream Market recently issued an statement which said they’re shutting down their services on 30th April, 2019.

Is Dream Market Exit-scamming? Absolutely not! An exit-scam indicates a marketplace’s act of running away with user’s money/funds.

Dream Market on the contrary issued a statement publicly for all their users to see nearly a month prior to their final shutdown, which gives users more than ample time to cashout their funds on the marketplace. 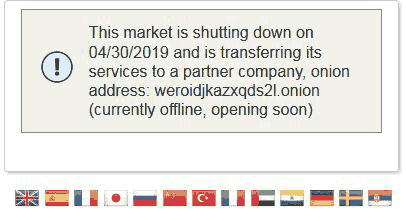 Because Dream Market is closing down; it also has terminated new registrations which further indicates that there’s no scam of any kind at play here.

Why is Dream Market Shutting Down?

The answer to this isn’t clear to anyone except the Administrative team; but as per the issued statement the marketplace will be transferring its services to a partner company which can be found on – weroidjkazxqds2l.onion

What the partner company will offer on the above URL isn’t known yet, although it can be safely assumed that they may as well offer similar darknet services even if not a complete Darknet market.

There is a fair chance that the marketplace administration will come up with a newer project at a later time; however that’s just speculation.

With Dream Market out of the game;  Icarus Market, DeepSea Market and other similar Marketplaces which were just next to Dream Market would gain significant traction.

If you’re an established vendor on Dream Market; it’s good time to take screenshots, PGP-key verifications and anything else you can do and apply to these alternative markets for a vendor account.

Considering how creditability on Dream is by itself a resume for the Darknet and you should use it while it lasts.

As for buyers, this is when you cashout your remaining funds out of the market and onto some other Marketplace, or just a wallet.