This CounterMail review will probably solve your problems if you need an anonymous e-mail provider.

On the surface, it’s an e-mail provider which claims to be private and secure. But, how true are its claims? That’s what we’ll be discussing throughout this piece.

Here’s a list of things we’ll be discussing throughout this CounterMail review:

Without beating around the bush, let’s get started?

CounterMail is an anonymous, Sweden-based email provider. It’s one of the oldest players in the game and was launched all the way back in 2008!

Just in case you didn’t know, services like Gmail, Yahoo or Microsoft can “READ” your e-mails! Yes, we aren’t just talking “having access”, we’re talking actual breach of privacy! If that bothers you, you’re exactly someone CounterMail was built for.

Here’s everything that defines the service:

Before we start, just know that it’s 100% anonymous. Meaning, absolutely no personally-identifiable data is required for signing up. 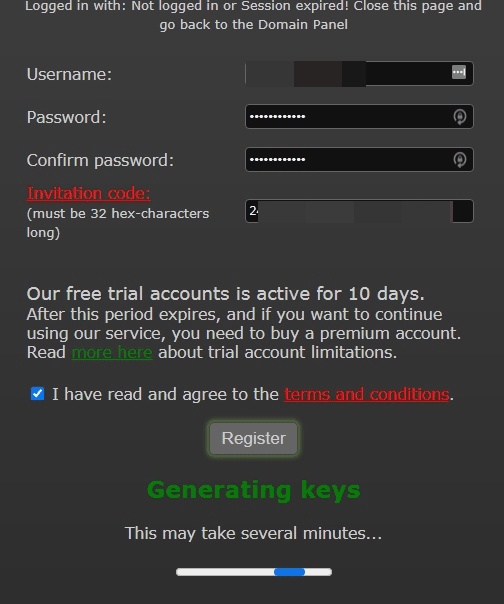 You only need a username and a password. Nothing which can be traced back to you. That sure got your attention, didn’t it?  Let’s discuss some of its other features then?

Is CounterMail End to End Encrypted?

This is one of the biggest reasons why we’re pushing this CounterMail review out today.

CounterMail is completely E2E encrypted. Not sure what’s that or why that matters? Well, it means the e-mails are encrypted between the two (or more) parties. Only the authorized parties have access to the e-mail.

No one else, not the govt. and not even the CounterMail team can read your e-mails. The e-mails are encrypted on your computer, and decrypted on the recipients’ computer.

The company uses 4096 bits encryption keys and OpenPGP for encryption. Let’s just say that it’s one of the most secure encryption available to the common man on the planet in 2021.

No, it doesn’t. Obviously, nothing else would matter if the company stored logs, right?

Just to be sure, we also went through the fine-print on its T&C page. There’s no loophole or “technicality” which says it’d let them log IP addresses in any case either.

So, in a nutshell, yes, it’s a 100% anonymous email provider. The same will become clearer once you go through the “registration” section later on this CounterMail review.

They also do not store cookies. Almost every single website does these days, they don’t. Cookies aren’t as “identifiable” as IP addresses, however, they still may be used to trace you. CounterMail makes sure that doesn’t happen.

What are CounterMail diskless web servers?

This is a first even for us. We’ve been with a handful of anonymous email platforms so far, however, this isn’t something that any of those offer (to the best of our knowledge).

In simple words, the web server makes sure your IP address doesn’t leak, which would be the case if it used a hard  disk drive. Also, being diskless makes it immune  to being hijacked/stolen.

What are the security features CounterMail offers?

The company claims it may be the “only” provider in the business offering protection against Man-in-the-Middle attacks.

While most companies opt for SSL as a means of protection against MITM attacks, CounterMail brings in another security layer. It adds a layer of RSA and AES-CBC encryption on top of its SSL encryption.

Maybe you’re into technicalities? Here are the finer details: 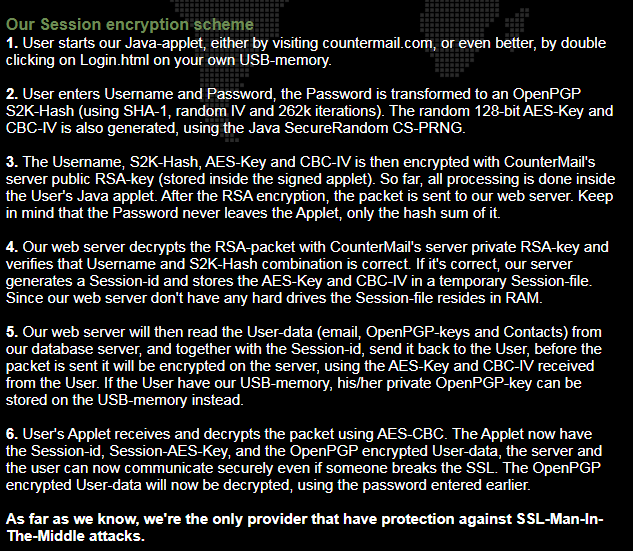 This is something else we love about CounterMail. They don’t just slap technical terms and expect you to take their word for it. The company tries to simplify things and actually explain why and how it delivers on its claims.

All the terms above may make CounterMail sound very technical. It’s not. In fact, it’s simpler than using Gmail or Yahoo or any other e-mail provider you’ve experience with.

Pretty self-explanatory, isn’t it? You compose, receive, and delete e-mails with utmost ease.

What is CounterMail “Safebox”?

This is an impressive feature which lets you protect and store your username and passwords. It’s basically a built-in password manager.

Being honest, it isn’t as “feature-rich” as standalone password managers. However, you can use it to store your usernames and passwords with End-to-End encryption. No more forgetting passwords!

It also uses a different encryption from your CounterMail email. This means you can use a different password for your safebox. There’s a “master password” which grants access to this safebox.

That’s where the “Identities” feature comes to the rescue. CounterMail lets you create new e-mail IDs linked to your primary e-mail.

These IDs can be used to both send, as well as receive e-mails. Obviously, to a third-party, there’s no link between your primary e-mail and these aliases.

Can you create webforms using CounterMail?

Suppose you wish to collect data from users, and you wish to do it anonymously. CounterMail allows setting up encrypted web forms.

These are just forms which can be set up on websites, landing pages, or basically anywhere else which supports HTML.

The responses are received as emails, and are completely end to end encrypted. Simple tweaks such as a thank you response, or a copy of the submitted data to the senders’ email are possible as well.

Can you use custom domains with CounterMail? 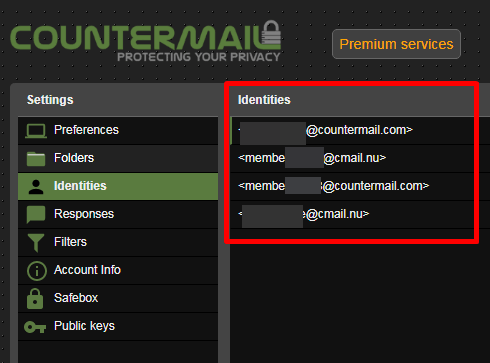 Obviously, personally we think it creates a weak-link as far as anonymity goes, depending on your domain registrar policies. However, it sure is available as a feature.

Do note that this requires an additional payment of $15.00 which is a one-time payment for each domain.

Yes it does, and of the highest tier at least as far as “password” security goes.

It’s basically a 2-factor authentication. However, instead of the traditional OTP which may compromise your identity, CounterMail uses a USB keyfile.

It’s basically a file which you’ve authorized as your 2-FA. Everytime you login, in addition to your password, this file would be required to login.

This essentially renders any and all types of attacks on your passwords useless. Even when your password is compromised, your account remains safe.

What features CounterMail may offer in the future?

The company seems to have some of its better days ahead of it, based on the future features it has planned.

So, for starters, there’s scheduled sending. However, what we’re looking forward to are the self-destruct messages. In other words, these mails would be only available for reading once and then they’re permanently deleted.

There also are plans for real-time, encrypts instant messaging. And finally, another layer of encryption based on passwords is in the pipeline.

Do note that these features do not exist at the time of scribbling this CounterMail review. These are just “planned” features for a later date.

Where to get CounterMail invite codes and how much does it cost?

This probably is one of the most unique aspects on this CounterMail review. It’s not open for everyone! It technically is, but, with a few restrictions.

So, CounterMail does offer a 10 day free trial. But, to get the free trial, you must know someone already using CounterMail. Each premium member at CounterMail gets his/her share of invite codes.

If you don’t know someone using CounterMail, you’ll need one of these two things to get an invite code from CounterMail:

Regardless of how you get your invite, note that you only get a “free trial account for 10 days”.

After that, you’d need to upgrade to a premium plan. They’re as follows:

As for payments, they can be made using the traditional modes such as cards or wire transfers.

However, we suppose you’re seeking anonymity? In that case, they accept Bitcoin payments. Completely anonymous.

Should you use CounterMail for secure emails then? We’d say yes. It’s a company that has proven itself against time and does offer some serious protection.

Rest assured, the e-mails/IP addresses or identities aren’t leaked. It respects privacy and doesn’t even ask for anything which can be identified to a person. The legalities too are pretty acceptable considering it’s based in Sweden.

Even in terms of features, the fact that it makes the email headers anonymous, offers the Safebox, aliases, 2-FA and has autoresponders do not disappoint.

In a nutshell, if you need to send e-mails which can’t be traced back to you, we’re sure this CounterMail review did get you at least one more option, didn’t it? 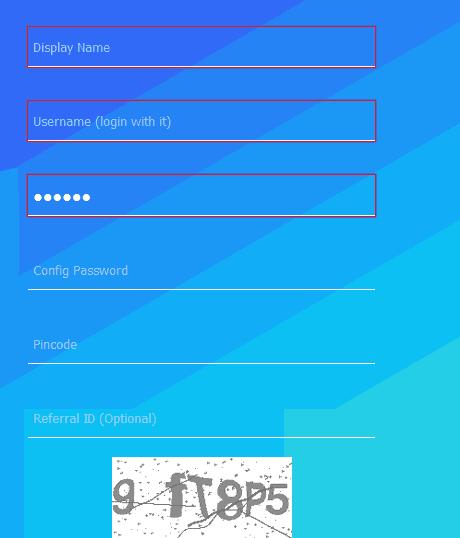