Watched “The Imitation Game”? If you did, then you in all probability already know what the Cicada 3301 2017 puzzle is, or what most believe it to be at least.

I will use Cicada 3301 2017 instead of just “Cicada 3301” for the rest of this article as I wish to write this piece from the 2017 perspective of things which were expected to happen or did happen from the beginning of the puzzle to 2017.

Before diving into the details, let me clear what it’s on the very surface level. It’s a puzzle which is posted on the Internet with the intentions of recruiting “highly intelligent individuals”.

Solving which supposedly gets you recruited to the NSA, MI6, Hacker groups and the speculations go on and on; although no official prize has ever been announced.

The Puzzle is centred around Steganography, Cryptography and Data security. In laymen’s terms- computer stuff. But hey, the Cicada 3301 2017 isn’t limited just to the digital sphere, rather the clues to the solution are actually hidden in the real world! (We will explain in detail in the later sections).

It’s one of the creepiest mysteries existing on the Internet today; that’s so because no one knows who’s behind the puzzles, or what rewards solving the Cicada 3301 2017 puzzle actually bestows upon one.

It all started on January 4th, 2012. An elaborate puzzle appeared on message boards and forums which read: 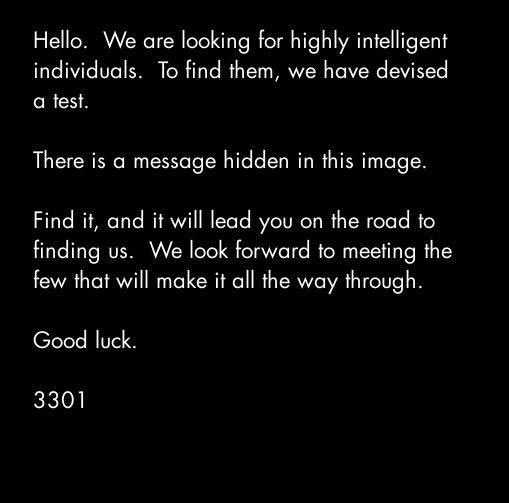 Then, exactly a year later on January 4th, 2013 another puzzle showed up on the /x/ and /b/ 4chan imageboards, which was: 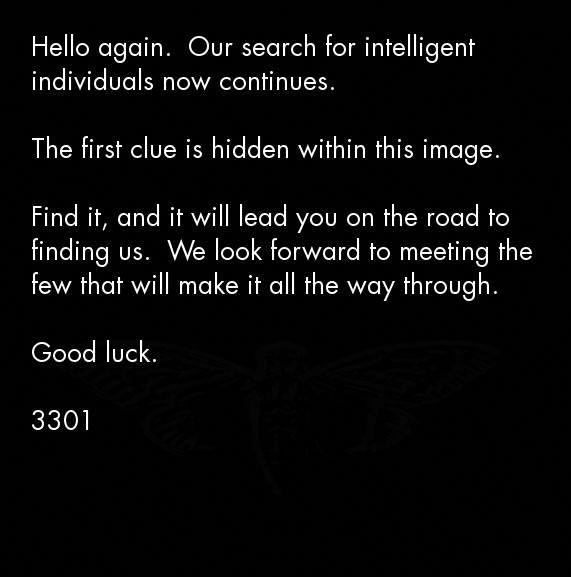 And then finally on January 4th, 2014 another image was uploaded on Imgur which was:

“Epiphany is upon you. Your Pilgrimage has begun. Enlightenment Awaits”. 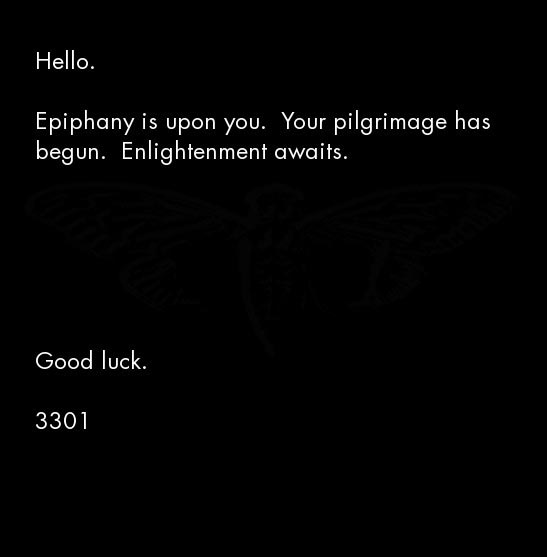 No further puzzles have been posted since, although a new clue was posted on January 5th,  2016 but that’s it.

Will there be a Cicada 3301 2017 puzzle? No one knows. But many eagerly await its arrival. Now that we’ve gone through the puzzle timeline, let’s look at the solutions or the back-story of the mystery!

Deciphering the Puzzles and their Clues!

I was able to get the story of just one solver Joel Eriksson; and it’s our only gateway to what happens after you keep solving the clues. At least for the most part of the Cicada puzzle.

Although note that there were a lot of fake puzzles, and a lot of fake claims which claimed to have solved the Cicada, but were mere copycats and imitators. The real Cicada puzzle is PGP signed and its authenticity can be verified.

Anyway, the first image contained a code which could be deciphered using the program- outguess. Decoding this leads to another set of alphabets which actually is a URL.

This URL when opened had a “Duck” image.

This image too can be decoded and leads to a Reddit URL, which apparently has Mayan numerals on the page. Decoding these Mayan numerals let you decode an anonymous reddit user’s post which had two images. 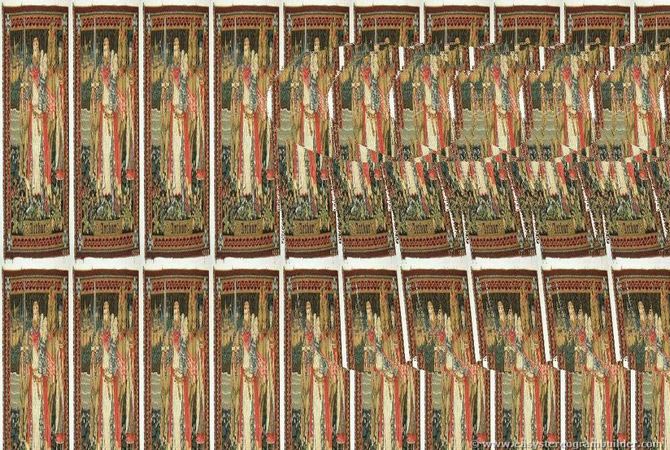 Decoding these images leads a Texas phone number! (Hello real world!). When the number is called, an automated, robotic voice says (“Very good! You’ve done well…..”) and at the end of the voicemail, there were some more cryptic instructions.

Decoding these instructions would lead one to a website with a timer on it which asked them to be patient and come back on “Monday, January 9th”.

Once the timer ran out it would give to the users a set of GPS co-ordinates, which lead to telephone poles in 10 different cities in different counties such as the U.S.A, Japan, Spain, Poland etc.

Here are the coordinates which showed up: 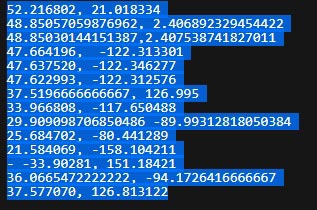 These poles had QR codes attached to them upon scanning these the users were again directed to the William Gibson poem – Agrippa. The same book code that was found on Reddit when used on this poem leads users to a TOR URL- http://sq6wmgv2zcsrix6t.onion

(This is as far as Joel went, what happens from here is gathered from different sources).

On the .onion website, users found a message asking users to create a new, free, public E-mail ID  where they were sent another URL which hade to be appended with a slash.

Anyway, finally after going through a final round of deciphering and sending an E-mail they were invited into the brotherhood; and the story ends with this leaked email. 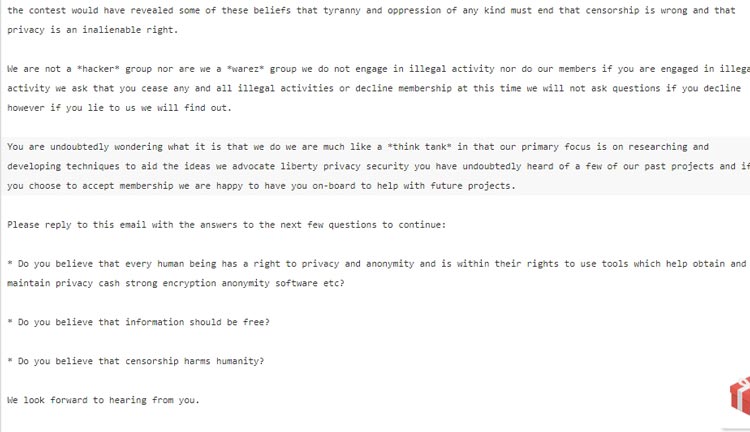 And finally, a message appeared from Cicada publicly thanking all participants; and promising of similar future opportunities; and they did held up their of the Bargain by posting a new Cicada puzzle in 2013.

So let’s address the one final question for this article.

The Cicada team posted an update on Pastebin around the end of April 2017, not a new puzzle or a clue, but an update. It contained the following text – “Beware false paths. Always verify PGP signature from 7A35090F.“. This has been verified to be encrypted with the actual Cicada PGP key.

This was just to ensure no unauthorized party/individual can post a new puzzle, clue or information about Cicada. It was a good fit for the time, considering how many users one of which by the name of “CicadaDave” made himself public on Reddit claiming to be a part of the official Cicada team.

According to Dave, he was one of the four founding-members of the Cicada puzzle, claiming to be a MIT student and having created Cicada as a joke.

The person even provided for his Facebook account, and encouraged communications and outreach. Obviously as expected by many, the person was revealed as being just another Cicada-fan and not one of the creators. This was officially not accepted by Dave, but his lack of proof made that the general opinion.

There hasn’t been a new update in the last 3 years; so the chances are low. Also, they stated in one of their last puzzles that they found the people they were looking for which further diminishes the chances.

But then again, from what has prevailed so far; nothing is improbably or can be said with absolute certainty, not when it comes to Cicada 3301 2017.

As said earlier, there are many speculations to the same; but that’s all they are, speculations.

But if the official statement from the group is to be believed; they’re not an illegal or group with illicit intentions, which I extracted from the final E-mail they sent to the participants, they’ve clearly stated.

“We are not a *hacker* group nor are we a *warez* group we do not engage in illegal activity nor do our members if you are engaged in illegal activity. We ask that you cease any and all illegal activities or decline membership at this time we will not ask questions if you decline however if you lie to us we will find out.”

Also, they claim to be a “think tank” with their primary focus on research and development, which is great as long as it’s true.

So bottom line; Cicada is, was, and probably will continue to be the unsolved mystery that it is, unless someone official from the groups steps into the limelight and clarifies the doubts.

Deep web mysteries and the importance of a VPN

I do believe this has been the most detailed explanation  of the Cicada 3301 puzzle on the web.

However, it wasn’t the first and it probably won’t be the last. And, while Cicada hasn’t been linked to any illegal/malicious acts so far, it’s not promised that all the other dark web mysteries will be equally legit.

Hence, I’d recommend you to use a NordVPN along with TOR whenever you use the dark web. Who knows when you stumble across one such mystery puzzle?

Moreover, some puzzles are created for the sole purpose of hacking into user accounts, devices, and even blackmailing them.

If you think TOR will protect you, it won’t. TOR isn’t very secure. Various methods can be used to either track you directly, or get personally-identifiable information about you.

Hence, I’d recommend start using one of the best VPN services. Not just for the dark web, but for your everyday browsing as well. They’ll protect your IP address, encrypt your connection, and protect you from law-enforcement subpoenas.