BulletVPN Review: Gone are the days when a VPN was just a choice, pertaining to today’s Internet censorship and all the tracks the govt. keeps of its citizens, a VPN is a necessity in today’s terms.

Must check: A decade back, a VPN was used only by those who were involved in illicit activities on the internet, today? Not so much. Anyone and everyone who so much as checks their Facebook accounts from a public or even a personal computer can appreciate the need of a good VPN.

And contrary to public opinion, a VPN does a lot more than just “Hide your IP”. So before embarking on the journey of this BulletVPN review, let’s contemplate the need of a VPN to begin within the first place.

When and Why do you Need a VPN?

If you’re on this BulletVPN review, you definitely have been acquainted with what a VPN is, so I wouldn’t beat that drum again, but let me just walk you through what other shields a VPN provides apart from simply masking your IP address.

Masking the IP is of course the primary weapon a VPN has in its arsenal, but how it effects you and its consequences aren’t singular.

These are just some of the benefits a VPN showers you with, but I’m pretty sure these are enough to paint you a picture of how important exactly a VPN is.

Now there are quite a few VPNs out there in the market, so why then are we singing praise-songs for this specific VPN in this BulletVPN review?

We aren’t, it’s just a VPN that had all the features a VPN should have, and then some. So we decided to put forth this BulletVPN review out here for you folks to go through it, and then if you think it suffices your needs and goals (which it probably would), you can go for it.

So here’s a front-row seat for you on the VPN.

The first and foremost aspect I impart my attention to on any platform or tool I review is its User-interface.

Simply because I believe no matter how unique and feature-rich a product is, if the interface is complicated, and users have to go hunting for options and buttons, it’s no good.

Well, that’s not the case with BulletVPN. Its welcoming dashboard is pretty intuitive. So much so that even if this is your first day with a VPN, and you’ve never had a handshake with any kind of VPN before, even then BulletVPN’s dashboard befriends you quickly and you’ll find your way around it with ease.

The dashboard is divided into two sections, the left-sidebar, and the centre-screen. 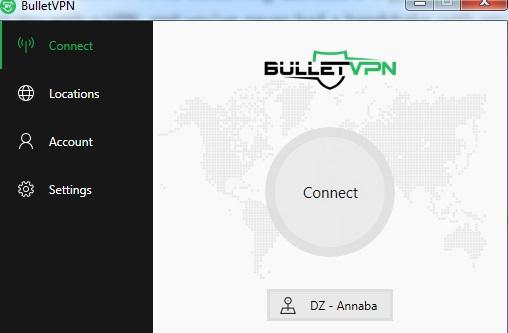 The left-sidebar is the navigation bar kind of thing letting you reach different sections of BulletVPN. It holds:

And the center-screen shows you the information related to the link you’ve clicked on the left navigation pane.

In a nutshell, it’s extremely user-friendly. All the options are laid right there, and it’s pretty easy to understand as well.

So the connection process is simple, as well as fast.

The primary feature anyone would wish for in a VPN is availability of locations, lots of locations. Well, that’s another aspect BulletVPN doesn’t disappoint you in.

It supports over 20 different countries, including: 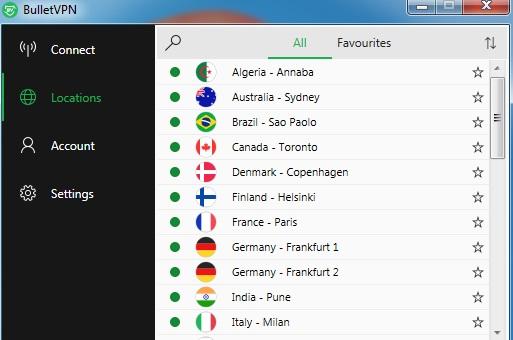 To name just a few. And most of these countries are armed with Multiple Servers. What this means is that you can connect to more than just one server for that country, and this makes sure that you always get optimal speed by reducing server overload to a single IP. 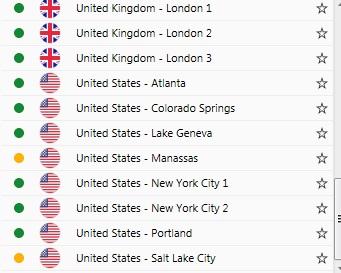 Another feature that might not be a “deal-maker”, but still exists is its “Favourites” tab. It lets you bookmark your favorites locations by clicking on a star next to them. This provides for easy access and organization for the next time you wish to use that IP.

Remember when I said in the initial sections of this BulletVPN review that VPNs have stronger security protocols? It’s time to walk the talk. BulletVPN offers as many as 5 different connection protocols.

Being honest, it’s not exactly a “Secure” Protocol, and BulletVPN doesn’t claim it to be secure either. It’s  just an option for you to connect to the internet when there is no other protocol working for you. I am telling you ” no other protocols working ” because sometimes I phased that type issue many times with various VPN services. Other available protocols don’t work at your place then you may try PPTP.

LT2P denotes Layer 2 Tunnelling Protocol and is most often than not paired up with IPSec.

The fact that L2TP encapsulates your data twice results in a comparatively slower connection, but I’m pretty sure most of us here are willing to sacrifice couple seconds of your life for an eternity of anonymity aren’t we?

It’s AES Cipher is currently one of the strongest existing connections in the industry, and it uses PSKs (Pre-shared-keys) to authenticate connections, what it means for you is that even if the connection is compromised, your data still remains secure.

Open VPN is an open source connection protocol which uses Pre-shared static keys, and SSL / TSL certificates in order to authenticate the connections.

There’s no rocket-science to it, it simply let’s you connect over a secure VPN, simple as that.

The whole point of me dragging you through all those connection protocols was to cover every iota of fact for the VPN in this BulletVPN review.

So rest assured, BulletVPN is all set to keep your identity and privacy secure, period.

You can connect to OpenVPN through two connection types: TCP or UDP.

TCP is the abbreviation for Transmission Control Protocol. It’s not as fast as UDP, but definitely one of the most reliable connection protocols.

TCP protocol works on a “Check and send” framework. Meaning it sends a data packet, makes sure it has reached its destination, and then sends the other data packet.

This makes sure that every bit of data is being delivered where they should be, but this whole “check” thing makes it a tad bit slower.

UDP stands for User Datagram Protocol. Consider it the careless brother to TCP. It’s basically the same thing, the only difference is that it’s used for connections where “Speed” holds the priority and not a perfect data stream.

Consider “Gaming” or “video-calls”, they can take a bit of data loss as you do not need to get every micro-instance of video, but “speed” is of paramount importance with them and hence UDP is the optimal connection and not TCP.

So basically UDP sends continuous data packets without checking if the earlier packet reached its destination, or not. So there might be a bit of data loss, or disorganization of data due to the data sequence being lost.

But then again, it’s comparatively faster to TCP which gives it its own use.

Now that we’ve got the “in-tool” features out of the way, let’s have a sneak-peek at some of the other features BulletVPN provides.

a). No Speed Loss

A general myth associated with VPNs is that, VPNs slow your connection down. Well, that might be true for any other VPN out there, but not for BulletVPN.

I personally compared my Internet speed before and after using BulletVPN using Ookla Speed test. And I must say the speed loss was in KBs, which I wouldn’t have even noticed if I wasn’t using a calculative tool such a Ookla.

The reason behind these are BulletVPN houses its servers in Tier-1 countries, so they at all times have the best speed available on the planet.

Why should you pay thrice when you can pay once, well that’s the theory BulletVPN works upon! It let’s you connect to as many as 3 devices simultaneously.

So for any general person owning a Desktop, a Laptop, and a Mobile device, it’s the perfect solution.

Unlike quite a few VPNs out there, BulletVPN doesn’t restrict you on the bandwidth. Meaning you’re free to use as much of data on BulletVPN as you wish or need.

So there’s no monthly, weekly or any other limit.

And I’m trying not to sound too excited on this BulletVPN review, but it seems the VPN isn’t done with its features yet, so it included “unlimited server switching” as well.

What that means for you is that you can choose unlimited new IPs, and switch between them as many times as you need. That’s again a premium feature even some of the top players in the industry are void of.

So let’s say you wish to stream Netflix, or BBC or any other online streaming service, only to be disappointed because of the regional restrictions that the govt. and the internet likes to have these days.

Well that’s where Smart DNS comes to the rescue. It’s an additional proxy service, which let’s you stream videos from services which might be restricted in your region (geographically).

To add to all that, Smart DNS can be configured with PS4, Xbox, Xbox 360 and Apple TV as well! The best part is, you do not have to shell out a single buck out of your pockets to use Smart DNS! It’s absolutely free with BulletVPN!

I believe a VPN isn’t a VPN unless it provides for the No logs policy.

If we’re paying for our anonymity and privacy to be protected, we except a totally clean-slate, and that’s exactly what BulletVPN offers! In fact, this is probably the “best” feature you’ll find about BulletVPN in this BulletVPN review.

It doesn’t keep any logs of your activity, IP address or whatsoever. Completely decentralized and clean, just the way we like it.

Now after showering down with all those features, one would expect BulletVPN to burn a hole in your pocket, but it doesn’t!

In fact, its pricing is surprisingly dirt-cheap, they’ve got three plans:

The features are essentially the same, the price difference is only because of the renewal cycle. The longer you purchase for, the cheaper the VPN is for you.

And to all that, it adds a 30-day money back guarantee as well. So you’ve got absolutely nothing to lose by any calculation.

My Final words about BulletVPN Review

So wrapping up this BulletVPN review, all I can say is, it provides for all the features you’d expect in a VPN, and then some.

So yeah my vote totally goes out for the VPN.

But before making a decision, I urge you to give the platform a try, nothing can possibly go wrong considering their confident 30-day money back guarantee (and I can nearly assure you, you won’t be needing that!).

Do leave me your feedback and experience on this piece in the comments down there.

If you are still interested to read some other most recent published deep web or VPN related blog posts then you try below given blog links.

Do you like this review and you have any update that you want to share with us that we can update in this article then you may write by our facebook page or group.