Blockchain wallet is one of the oldest wallets in the industry, being in the game for as long as 6 years now. It has also held the positions of the most visited Bitcoin websites back in 2013.

Although it’s much more than just a “bitcoin wallet”. It’s more like a data-hub which makes you aware of the latest blocks mined, the recent transactions on the Blockchain and even has a price-graph to reflect the price of Bitcoins in real time.

We would dissect the Blockchain bitcoins wallet and analyze every square inch of its service, but before that  let’s have an aerial view of the Blockchain

Throughout this review, I aim to go through each and every option/feature and usability factor that Blockchain has to offer, and my own personal experience with it.

This is the first aspect or element I review whenever we review anything and everything, because this is the very first thing we notice on any platform, the content, features, and everything else comes later, only if the user-experience is good enough for us to continue, isn’t that so?

So as soon as you login to your Blockchain online wallet, you’re presented with the following dashboard:

The whole screen is divided into three primary sections:

The left-sidebar holds links to some useful sections which are explained in detail in the later sections, the center-screen lists all your recent transactions, and the right-sidebar shows you your wallet address which you can use to receive Bitcoins.

So yeah as far as “User-experience” goes, I’d rate it 5/5 because the options have been laid out neatly, and there isn’t any option which you need to hunt for, if it exists it’s out there in plain sight.

Let’s dissect the wallet for every inch of its existence. The left Sidebar consists of five options for you to choose from.

The home button isn’t anything special, instead, it does what you’d expect any other “HOME” button to do, that’s bringing you back to the homepage from any other section of the platform. It’s present permanently on the left-sidebar, hence providing for easy access.

This holds and lists all your transactions. Click on it and it will take you to the following screen.

As you can see from the above screenshot, there are options to “Send” and “receive” at the center of the screen.

And the right-sidebar on the center-screen shows you the amount you’ve sent to the address.

It also let’s you filter out the transactions based on their nature from the center screen’s top bar, that is All/Sent/Received/Transferred.

There are two factors with the Blockchain wallet worth being pointed out individually: 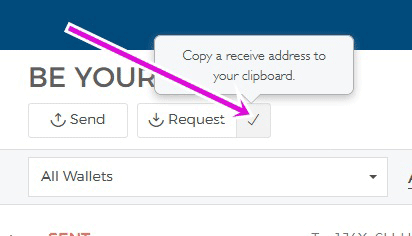 The most important factor for any Bitcoin wallet is the level of security it offers to its users isn’t it?

Back in 2011, when Blockchain started out, it wasn’t as serious about security as it is now, which resulted in quite a bit of negative reviews for the platform.

But it has been improvising ever since, and after all the updates that the platform has witnessed recently, the security measures on the platform have shot above the average mark without doubt.

Blockchain has broken down its security features into three different security levels.

Level 1 is broken down into some simple steps you can take to ensure your wallet’s security.

1). Email Authentication: The very first aspect is adding your Email account. This email verification acts as a 2-factor authentication, and when you or anyone else wishes to log in to your wallet using a different browser or IP address which has never been used before, they’d have to verify authentication by clicking on a verification link every single time which gets sent to the E-mail ID.

So in order to gain access to your Blockchain wallet, your hackers will also have to compromise your Email Ids which makes it nearly impossible for most outlaws out there.

2). Backup Recovery Phrase: Even though it’s categorized under Level-1 protection, it’s pretty advanced. It’s an option which let’s you create a “backup phrase”, it’s like your “backup password” in case you forget the primary one.

It’s a set of 8 words, which are displayed to you in two sets, keep in mind that the “sequence” of these words is important as well.

Apart from offering the backup phrase, Blockchain wallet also offers a “printable sheet”. It’s a blank sheet which can be printed, and these words can be scribbled down exactly as they appear on the sheet for safe-keeping.

The sheet ensures that your password need not be stored online or digitally because computers are prone to being hacked.

Instead, when you print it off and save it somewhere offline, there’s absolutely no chance of someone gaining access to it locally.

3). Password Hint: The third option on Level 1 Blockchain security level let’s you create a “password hint”. It’s the same thing as any normal “password hint” you generally set for your computers or laptops.

It’s a phrase, sentence, word, alphabet, number which helps remind you of the password you set in case you forget it.

It’s a lighter approach and isn’t as hardcore as the backup phrase, but it helps nevertheless, for e.g. you can set it to something personal, for e.g. “First date of meeting her” works fine. No one knows who “her” is, or the date except you.

Or you can also use a simple Alphabet, for e.g. the first alphabet of the password to help you remember the rest of the string.

Anyway, bottom line is, it’s an optional choice you should totally opt for.

Check Out: How to buy Bitcoin with credit card

1). Linking your Mobile with Blockchain: The first tab says “Link your mobile number”. This option doesn’t mean “enable 2-FA”, there’s a separate option for that.

This is just to link your mobile number with Blockchain.

Just enter your number, and you’ll receive a one-time-password (OTP) on your cell phone, enter it on the next screen to successfully verify your cell phone number.

2). 2-Factor Authentication: After you’ve successfully linked your mobile with the wallet, you can use this option to enable two-factor authentication for your mobile phones.

After successfully scanning the code, a 6-digit code is shown to you which you need to enter on the screen to successfully enable the two-step authentication.

Unlike other 2-factor authentication systems, Blockchain doesn’t ask for your cell phone number to send you the OTP via SMS, it respects our privacy and anonymity.

Instead, you’ll have to use Google authenticator to log-in and validate your attempt everytime you log in, you’ll need to open the Google authenticator app, and the 6-digit code, valid only for the next 30 seconds will be shown to you. It changes every 30 seconds, so make sure you enter it as soon as it’s up on your cell phone!

You can also pair Blockchain up with your Yubkey physical authenticator if you have it instead of using the Google authenticator.

Either way, once you’ve enabled the 2-FA, the chances of anyone breaking into your Blockchain wallet and meddling with your funds thins significantly.

You May Like: How to buy Bitcoin with Debit Card

Level 3 is the final and most-advanced level of security that Blockchain offers, it has just one option, that of blocking TOR requests, but when used wisely it’s more than just “secure”!

1). Block TOR Requests: Well it’s not something you should enable if you’re using the TOR network to browse the Blockchain onion network URL.

Pertaining to the fact that the TOR network is ill-famous for its “hackers” and “dark-activities”, it’s an excellent step as far as overall security for your Blockchain wallet is concerned.

2). Second Passwords for “Spending” Bitcoins: You can setup second passwords from the Settings > Security tab.

These are additional passwords you can set to ensure iron-clad security for your Blockchain wallet. These make sure that even if your account is compromised and all other security measures fail, and even if hackers gain access to your account, they won’t be able to spend any Bitcoins without this second password!

Note that you can’t “login” with this password, and it shouldn’t be the same as your login password either.

The next option up for review is the wallet’s settings. It lists all the important links for your Blockchain wallet’s proper functioning.

1). Wallet Information: This screen holds your Wallet Identifier in the first section, this is the identifier you need to use in order to log in to your Blockchain account.

They have listed it in a very simple manner, and have made it easy for us to find so that’s a plus  I suppose.

The second option under Wallet information is the button which let’s you pair your Blockchain web wallet with the Blockchain mobile-app.

This keeps the mobile app as well as the web version in sync with each other.

2). Preferences: This holds your “choices” of using the Blockchain online wallet, here are some of the options which can be controlled and configured from the screen:

And a number of other options.

3). Security: The security tab basically offers an “overview” of the security features we already discussed. It’s a screen from where you can monitor all the security measures enabled, or not enabled for your account.

You can also use this tab to enable/disable various options directly without going to the security center.

4). Addresses: This is the last option under the Securities tab, and it simply holds your Bitcoin address. You can use this address to receive bitcoins.

It also boasts FAQ as the very last option under the left-sidebar, and it does contain answers to some of the most basic and common queries, so that’s a problem-solver as well.

Blockchain has come a long way since we first scribbled down this Blockchain wallet review.

It now offers an in-built, integrated Bitcoin trading platform within the wallet.

In other words, you can exchange one Cryptocurrency for another without leaving your wallet.

A total of 28 Cryptocurrencies pairs available as of today.

As most other crypto exchanges, it too charges the fee based on a maker-taker model.

Another feature which was recently added to the Blockchain wallet is its “fiat-buy” support.

You can now buy Cryptocurrencies directly, in almost all the countries including US, India, Canada, France, Germany and most others.

Note that the availability of these deposit modes depend on your country.

In simpler words, you earn an interest simply for storing Cryptocurrency on the platform.

It’s not exactly like the staking that Cex.io offers.

Primarily because this has much higher minimum requirements and some other serious limitations.

Additionally,  the funds need to be moved from the general, non-custodial Blockchain wallets (to which Blockchain has no access) to custodial wallets.

Currently, only BTC/ETH/ USDT and USD Digital can be stored in the Interest accounts.

Also, an account must be verified up to the “Gold Level” for Interest accounts. This requires uploading and identity document and a selfie.

Canada, Japan are the two countries, and New York and Washington are the two states from the U.S.A which aren’t eligible for Interest accounts.

Basically, Blockchain uses these deposits by us to lend it to other users at a higher interest rate than what it’s paying us. Pretty much what the banks do.

The world has gone mobile, hasn’t it?

As of today, Blockchain is not only available as a web-based Bitcoin wallet, but also on:

It also is available in over 25 languages. Making sure it’s not limited to English anymore.

So yeah that’s all I had to pour out a far as this Blockchain wallet review was concerned folks. I’ve tried my best to paint as clear a picture of the platform as possible.

Do let me know if you’ve still got doubts you’d like to be answered, or just queries lingering around your brains.

And finally do leave your feedback regarding this whole piece as well, it helps us grow.