Bitcoin, even though decentralized isn’t as anonymous as it initially was perceived to be, or even if it is; it’s not the kind of anonymity that people were hoping to get from it. That’s a problem that this Blender.io review aims to solve.

Basically, Bitcoin doesn’t need your name, E-mail address or any other identity to function, true. But, every single of its transactions are recorded on a public ledger, which can be viewed and verified by just about anyone on the planet.

As a result of this, it’s public knowledge which Bitcoin transaction, amounting to how much money, went into which wallet.

For e.g. you purchase Bitcoins from some exchange and send it to your primary wallet, this transaction from the exchange to the wallet is recorded on the Blockchain and can be verified.

No matter how many times you send your coins from one address to another, they can still be followed as long as you don’t use a tumbler service.

And if your adversaries are really hell-bent, with a little more effort they can at times uncover the wallet owner’s identity as almost every Bitcoin exchange today, with a very few exceptions requires you to provide identity proofs before you can buy Bitcoins.

So that’s where Blender.io comes to the rescue, how? That’s what I’ll answer throughout the next sections.

Blender.io is basically a Bitcoin tumbler, a mixer of Bitcoins, which mixes your coins with other coins from its reserve and sends you a fresh set of coins which make your transactions as anonymous as technically possible at the moment.

It really doesn’t matter to me how feature-rich any platform is, unless it’s easy to use and simple to understand. Blender.io totally is.

In fact, it’s probably on of the simplest, cleanest and least-cluttered Blender Bitcoin laundry service I’ve ever used or seen.

The homepage just has the most-important options for you to use, for e.g. there’s the receiving address, a delay drop-down menu, service-fee, and mixing code. (Each one is explained later). 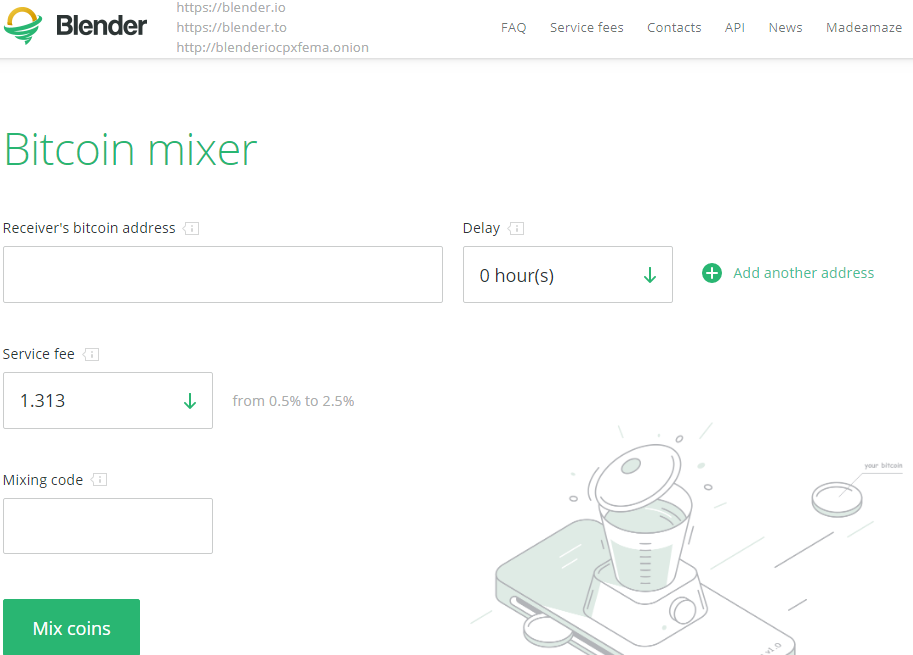 Even if you’ve never used a Bitcoin cleaning service before, you can make heads and tails so as to what Blender.io exactly is and how to use it; can’t you? I’ll show you the steps either way shortly!

Before learning how exactly to mix Bitcoins using Blender tumbling, it’s important for you to understand some terms and features without which you may feel lost.

Also, one of the most important factors when it comes to Bitcoin tumbling is anonymity, that’s like the central point, the only reason why we’re doing this, isn’t it?

And you’ll only use it if it’s anonymous enough; so it’s only logical for this section to be explained before how actually to use Blender.io

Blender.io doesn’t require you to signup, register or provide any kind of detail except the “receiving address”! That’s the only thing it needs, there can’t be a better form of anonymity if you ask me.

As there are no personal details asked for, there’s no way your identity is compromised, or can be linked back to, because as far as blender.io goes they don’t know who you are.

Blender.io is one of the most accommodating tumblers in this sense as well, most other tumblers offer 3-4 sets of delays, Blender.io offers as many as 24, yes one for each hour.

Meaning you can set your delays from 1 to 24 hour each and don’t have to choose from pre-set time-brackets (such as 3 hours, 6 hours, 9 hours) as is the case of most other tumblers.

This again is an anonymity-enforcing feature. It lets you add as many as 8 new addresses for each transaction (while most other tumblers provide no more than 5 addresses). 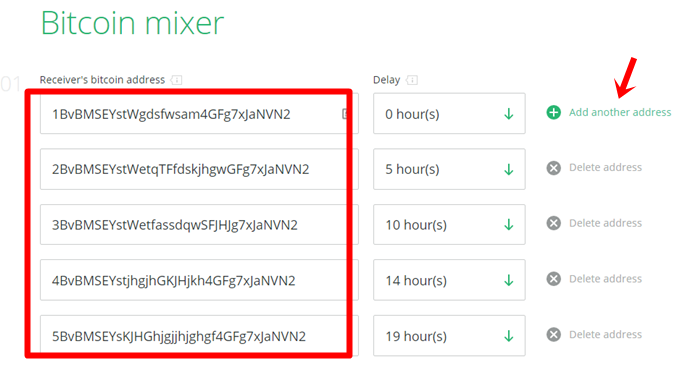 So, whatever amount you send in, is broken down into different parts and sent to the different addresses you’ve provided instead of being sent to one address.

Even though the outgoing coins to a single wallet too are anonymous enough, this feature makes it next to impossible for your total amount to be linked to you, or the coins going in.

Optionally, you can also specify the “distribution share” of each address, so you know how much % of your total funds are being sent to which address. 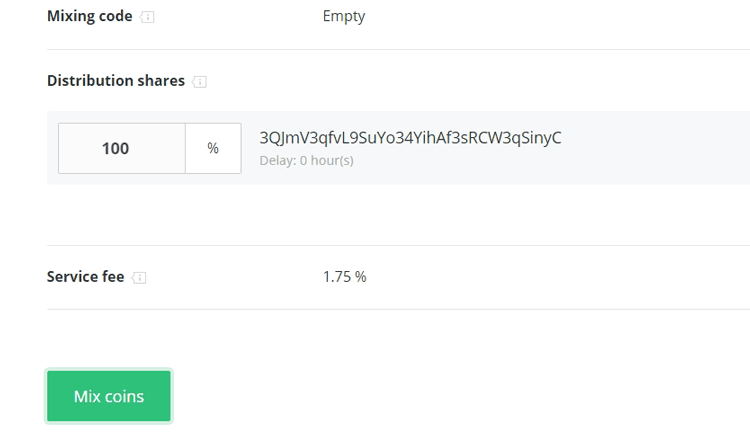 One of the other reasons why Blender.io is worth a try is its “No logs policy”. While some other tumblers may retain some logs for support or other reasons, Blender.io retains none.

How to use Blender.io – Mixing Process

Regardless of how simple the Blender.io mixing process is it’s still my solemn duty to show you the steps to do so just in case.

In order to use Blenederio mixing service, simply head over to the homepage, enter the address you’d like to receive the fresh, new coins on in the “receiving address” field. 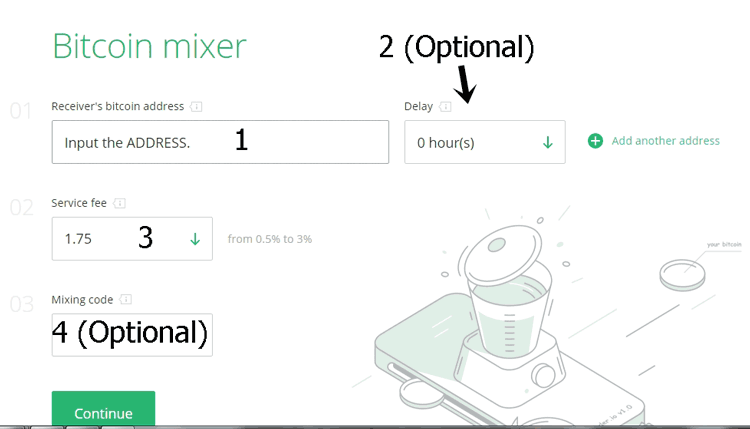 Set the “Delay” if you’d like, this as explained earlier is the time-period “after the completion of which” your outgoing coins will be dispatched to you.

So if you set it to 5 hours, your coins would be sent to you 5 hours after your send your coins in. If you’d like to receive your coins instantly, you can just let it be zero.

After that, again optionally you can add additional addresses for your coins to be sent to. It’s worth mentioning that you can set “custom delays” for each address, something which I don’t cross paths with frequently.

So if you set your address one to receive coins in 1 hour, address two to receive coins 5 hours later and so on, that’s exactly what will happen, and it further adds one more layer of anonymity for you.

It even lets you set a custom fee! You get to choose how much service fee you’d like to pay for the transaction which is an advanced feature as well.

Anyway once you’ve filled in the information, click on continue, it would generate an address for you where you’d need to send your Bitcoins, this address is valid for 24 hours.

All you’ve got to do is, send in your Bitcoins and done! Nothing else remains to be seen to. Once they receive your Bitcoins, they’ll process your order as per your set preferences.

So in a nutshell, it’s a process that takes less than 5 clicks, and 2minutes in all. The fastest method is, input receiving address > set fee > send Bitcoins > done! Could it be any simpler?

The mixing code is a feature exclusive the Blender.io. It makes sure that your coins do not mix with each other if sent in successive transactions.

Meaning if I send 2 BTC to Blender.io right now, and 1 BTC sometime later, Mixing code tells Blender.io that both the transactions are done by me, and hence the outputs for either transaction do not contain Bitcoins from either of the input coins.

In other words, mixing code provides for mutual exclusivity, hence you always receive fresh set of coins no matter what.

The fee as you’ve already seen is custom and can be set by you, the minimum fixed fee you can pay is 0.5% while the Maximum is 2.5%.

Along with this fee, there’s also an additional “address fee” levied on each extra address that you use, it’s 0.0005BTC/address.

The minimum amount you can mix is 0.001BTC (note that sending anything below this amount is considered donation) while the maximum amount depends on their Bitcoin reserve at the time of your mixing.

The maximum amount is shown on the final page where they show you the “input address” where you need to send Bitcoins and it varies from time to time.

Once you send your Bitcoins, the platform needs at least 3 confirmations before it processes your mix.

The payout is either instant or as per the time-delay set by you. It’s never delayed from their end if you haven’t set it and is generally processed almost instantly.

In case you aren’t aware, Segwit is a soft Bitcoin fork. It primarily differs from the legacy addresses (the normal BTC addresses) in its transaction signatures. In other words, the transaction size is lowered when stored in a block.

If you’re still confused, let’s just say that it uses less data on the network and hence charges less fee. Also because the size is lowered, more transactions can pass through each block resulting in faster transactions as well.

Then again, Segwit addresses generally start with “3”, non-Segwits on the other hand start with “1” in their addresses.

Fortunately, the two types are compatible with one another. So you can send coins from one address-type to another.  It’s being mentioned here as a feature because not all mixers support these. Additionally, the mixing process overall becomes cheaper for you as compared to mixers which do not support these forks.

A question that may surface in your brains is its legality. Well no, by no definition of the law is mixing coins, or using Blender.io illegal, it’s a completely legal platform.

Although if you’re trying to mix “ill-gotten” coins, which you’ve scammed, or stolen from someone in that case it may be illegal, note that in that case too using Blender.io isn’t illegal, it’s your act of scamming or stealing in general which is illegal regardless of you mixing or not mixing the coins.

As we’re addressing legal issues, let me address this as well.  No, you do not need to be a politician with hoards of black money in order to use Blender.io or mix coins.

Neither do you need to be a terrorist or anyone involved in any kind of illegal activity. You may simple mix your coins to:

So that’s a wrap folks as far as this insight on Blender.io goes. If you ask for my verdict, well it’s clearly extremely anonymous, it’s fast, has a lot of customization features and doesn’t keep any logs.

That just about sums up all and any features anyone can ever ask for in any blender tumbling service isn’t that right? I don’t see any feature or option being left out.

So yes, in my opinion it’s pretty perfect and accommodates to most needs, although that’s my personal opinion and I’d like to hear your verdict in the comments section down there.