Bitcoin is largely based on its anonymity principal, which also is the most misunderstood aspect of the cryptocurrency, that’s partly what I’ll discuss in this Bestmixer.io review along with the review of the mixer.

When I say misunderstood, what I mean is most people take Bitcoin to be completely off the grid, something that’s totally untraceable, well that’s not how it actually works.

Bitcoin is anonymous in the sense that, most of the times any particular Bitcoin token can’t be linked back to a person’s identity, so no one knows who actually owns the coins.

But even that’s not always true, and in countries like India and most other Asian countries purchasing of Bitcoin requires govt. ID proofs and verification which basically is completely against the primary infrastructure of what Bitcoin was meant to do.

Although the “official” problem with Bitcoin is, it’s extremely transparent which may sound like a “Feature” but it isn’t.

So, even though the identities of the people owning coins isn’t public, every single Bitcoin transaction from one address to another is. With the exact amount, fee, time taken and every other detail of it being recorded on the Blockchain ledger and available to everyone in seconds!

If the identity of even one person in the transaction chain is compromised, he/she can always be coerced or spied upon in various ways to reveal every other party involved in the usage of those specific coins.

Bottomline, you can’t hide where you get your coins from and they can be easily tracked and linked back to you, or who you send to, unless you use a Bitcoin mixer.

How does a Bitcoin Mixer Help?

A Bitcoin mixer works on an extremely simple principle of give and take. In simplest possible terms, it takes your unclean coins, and gives you fresh coins.

An example is, I take a USD $1 note from you, and provide you with two 50cent coins from my own pocket which in no way are related to the USD $1 note you gave me.

So the history of the USD $1 note from you, wherever it came from would end when you give it to me. You can spend the 50cent coins wherever you want, and anyone spying on your USD $1 note won’t ever know anything about it.

Now imagine that on a larger scale, instead of the two 50cent coins, what if I mix it all up with 1cent, 5cent, 10cent coins to make it a dollar and then give them to you, not only the history of your note ends, but the coins you receive too are extremely anonymous.

Here’s an illustration which explains Bitcoin mixing in case you still have questions left:

Hence even if you purchased coins using govt. ID proofs, you can always send it to a mixer, receive clean coins, and use them wherever you want without the govt. being able to trace where the coins went.

This is a summary of what the mixer offers and/or lacks which should get you a quick overview on the platform before actually diving into this BestMixer.io review:

I believe that’s all the prime features which make or break a mixer? Let’s get on with this Bestmixer.io review then!

The User-Interface is how the site feels and looks like, how easy or hard it is using the platform and so on. 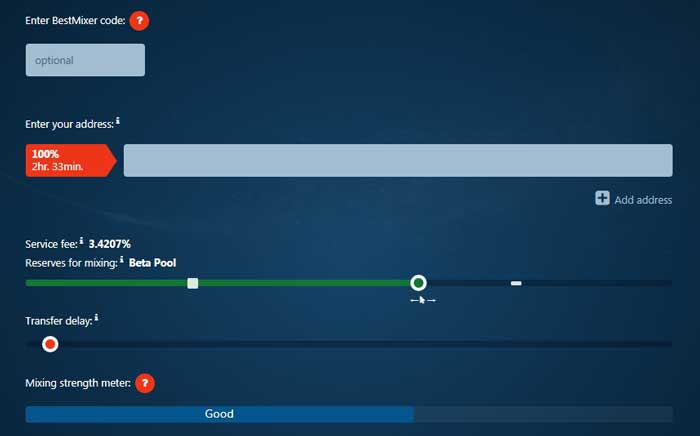 First impressions? It’s pretty modern and self-explanatory.  There’s that big bar where users need to enter their output addresses, the address where they wish to receive the coins, along with a neatly placed option to “Add address”.

Then there’s a slider for fee which can simply be slid left or right to increase or decrease the fee. Similarly, users can also set the delays for the coins using sliders and setting percentage distribution too is equally easy.

Making things even easier for users, it shows the strength of the mix which would help users add more parameters (more addresses, more time delays, change in fee etc) in order to make their mix as anonymous as possible.

It also has a slider for “Pools”, which is basically the coin-reserve you wish to get the coins from, for detailed explanations scroll down to the Pools’ section.

Best of all, it’s completely colour-coded, meaning each address has its own unique colour, so the colour-blobs on the sliders denote each address corresponding to that colour making it extremely user-friendly!

Additional Addresses are addresses which users can specify, in addition to their primary address for the clean coins to be sent to.

A real life example would be, me giving your friends 10cent, 20cent, 50cent coins in return of that USD $1 note which you gave me, instead of me giving you the funds directly.

You can later either ask all your friends to give you those coins, or ask them to directly buy products for you (sending funds directly from those different addresses to the destination) which would further de-link you from the original USD $1 note you gave me.

BestMixer lets users add as many as 10 additional addresses so each set of unclean coins can be broken down into as many as 10 parts. 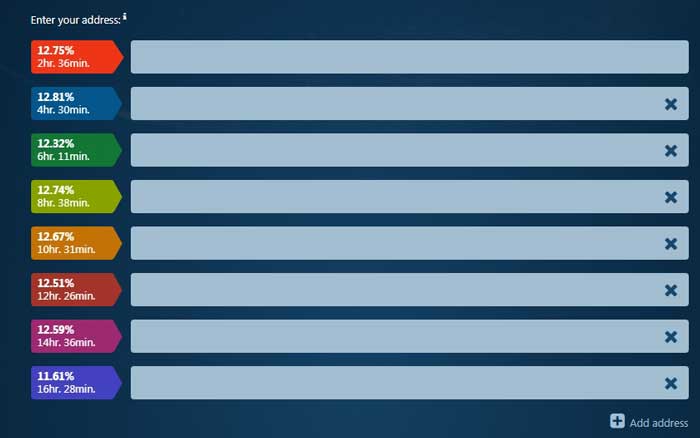 Time –Delays are basically the time-gap between a user sending in the unclean coins, and he/she receiving the set of clean coins.

It’s good to have a delay so that a Blockchain analysis can’t reveal or link that a set of transactions happened at the exact same moment, which may raise some red flags.

Making it simpler, it’s like me giving you those different denominations of coins for your USD $1 note couple hours, or days later instead of instantly.

Although time-delay is a dual-nature feature, most Bitcoin mixers only allow a single delay, meaning the wait-time for the initial, or first output, the output for all the other addresses is either sent at that time, or at random intervals after.

BestMixer on the other hand lets users control the delay for each individual address separately and this is what I’ve termed as a “user-controlled delay”.

This is another one of the features which adds towards user-control over the mixing process. It’s basically the feature which lets you control  how much of your funds are sent out to each individual address.

Again, not a feature all mixers support. Most mixers like to send out random amounts to all the addresses until the final amount is met, while Bestmixer.io lets users set those amounts using sliders to extreme precision.

It’s probably the only mixer I’ve ever come across which has three separate pools (reserves) of coins instead of just one.

The pools namely are the “Alpha”, “Beta” and “Gamma”, where Alpha is the cheapest (as in with the lowest minimum fee) followed by Beta and Gamma being the most expensive pool.

The Alpha pool comprises of coins from other users who have selected their coins to be mixed using the Alpha pool as well.

The Beta Pool is a reserve which has coins from other users (Alpha pool), the company’s own reserves and from investors.

The Gamma Pool on the other hand is the highest-end pool, comprising of coins only from the company’s reserves and investors making sure there are no funds in it from other users (Alpha pool). This generally is the cleanest and most anonymous pool of coins.

We’ve talked just about everything, except how much using Bestmixer costs. It’s obviously not free, no trustworthy mixer is.

The fee on Bestmixer is dynamic, meaning it depends on the pool and then it also can be controlled by the users so you can decide exactly how much fee you wish to pay to the mixer.

The Alpha Pool starts at a minimum 1% fee, the Beta Pool at 2% and finally the Gamma Pool being the most expensive and cleanest has a minimum fee of 4%. Users can choose to pay more than the minimum limits to increase anonymity.

Because the aim of a mixer is to promote and provide anonymity, it’s important to make sure that it has a no logs policy, only then it can be truly anonymous.

Fortunately that’s true in the case of BestMixer.io, it doesn’t store any logs permanently and deletes wherever logs are there 24 hours after the transaction is complete.

The platform also doesn’t require any registrations hence no identifiable information about the users is shared which can be used to link back to them.

They also have DNSSEC support  and DDoS protection! In a nutshell, the platform is as anonymous as can be, and pretty secure.

Coins lower in value than the minimum deposits are considered deposits and no refunds are possible on those.

No maximum limits have been specified except the fact that they claim to be able to support “high end mixes” so probably the maximum limit is pretty decent.

To ensure users don’t receive their own coins back at a later time, the platform provides a mixing code during each mix.

This is how the mixer identifies and links each user to their coins, so whenever they return later for another mix, they make sure that the coins from the same user do not get sent to them again.

The code also helps BestMixer provide users with the discounts at their subsequent visits considering how there’s no signup involved.

One final question I’d like to address in this Bestmixer.io review is, can you trust it?

When it comes to trust, it’s worth noting that they’ve a plethora of positive reviews on BitcoinTalk. I actually tried hunting for negative review but with no success.

Then, they also provide a “Letter of Guarantee” which basically compels them to pay you once you’ve deposited funds, or the Letter can be used to bury their reputation to the ground! And for companies like these the reputation is all.

So yes I do believe combining those two points, it can be safely argued that the company isn’t a scam.

Update: They weren’t anonymous, refer to the next section for more details.

As we’ve always said in all our mixer reviews, “mixing” by itself isn’t illegal, although the “source” of the coins if illegal makes the whole act illegal. And it seems Bestmixer.io was focused heavily on the darker side of the activity.

Bestmixer.io was seized around May 22nd by the Dutch Fiscal Information and Investigation Service (FIOD). They are accused of laundering USD $200Million+ worth of funds in Cryptocurrencies. It was seized as the source of these coins was Criminal in illegal in quite a few cases.

Another reason what made BestMixer illegal was the fact that it openly advertised itself as a way to evade AML (Anti-Money Laundering policies), which according to John Fokker (the Head of Security at McAfee) is illegal in some countries.

Another (not so shocking) news was that, the “No Logs Policy” claimed by the company, alike most other No Logs Policy statements was a hoax. The Europol has confirmed that they’re retrieved transaction data, IP addresses and even chat-messages on the platform.

The operation as it comes out, was a one year long investigation which started back in June 2018 by the FIOD and McAfee. Finally, the domains and servers used by BestMixer.io have been seized.

I believe I’ve addressed all the prime points this BestMixer.io review needed attention, don’t you?  We talked abou the UI, Time Delays, Percentage distribution, Limits, Fee, Logs Policy, and everything in between.

In my personal opinion, it’s one of the easiest, simplest yet the most professional Bitcoin mixers in the industry.

The fee is slightly higher than some others in the industry, but then considering its three separate mixing pools I suppose that’s acceptable.