The Bitcoin forking process builds a separate new cryptocurrency that is called Bitcoin cash, If some users holding his bitcoins in his bitcoin wallet then that type users can claim the same amount of Bitcoins Cash. But for claiming process, users need to hold bitcoin cash in different wallets. That’s the main reason I am writing ” best bitcoin cash wallets ” post for you, That post can guide you, which bitcoin cash wallet you need to use and which not.

And now that you’ve decided to give Bitcoin cash a try, you’re trying to get your hands on the best Bitcoin cash wallets. Isn’t that right?

Well, luck seems to be on your side cause you’ve landed exactly where you should’ve. By the end of this page, you will know every nook and cranny about every popular Bitcoin cash wallets out there, we will be going through every single feature each of these wallets offers, and then you can be the judge and jury of which wallet suits your needs best.

Bitcoin cash wallets are just wallets which let you store/spend and manage your Bitcoin cash funds. Just like the traditional Bitcoin wallets, the Bitcoin Cash wallets too are available for Desktops, Mobile or as Hardware wallets.

The wallets we have garnered with us for today’s review are. Before anything, One thing I want to tell you, Always hold your bitcoin cash or Bitcoin in separate wallets. That can help you to secure from any fund transfer miss happenings.

Hardware wallets are the wallets which are programmed onto a hardware device, something that generally looks like a USB device (although other shapes are available as well for Example: Ledger Blue (Look like a smartphone)).

These are literally the best, most secure ways to store any kind of Cryptocurrency, that’s so because it’s nearly impossible to hack into these devices because they aren’t software, but based on hardware.

Also, they have their own iron-clad security features. So here are some of the best Hardware wallets which support Bitcoin cash. 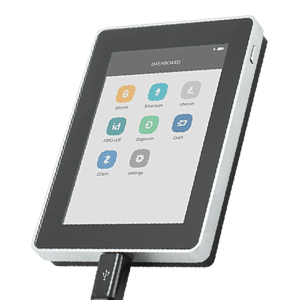 Ledger Blue literally is the best existing hardware wallet in the industry. The only wallet which comes with a touch-supportive, interactive screen.

It supports Bitcoin cash as one of its supported currencies; you can simply install the Bitcoin cash app (yeah it’s an app-based wallet) and get secure as well as store your Bitcoin cash funds on Ledger.

So without beating around the bush let’s list down all the features that the Ledger Blue has to offer:

And like any other hardware wallet, the primary weapon in your arsenal is the fact that your private keys are always offline and stored on your hardware device, hence leaving no strings attached such as the Internet or any network connected to it which might result in your funds being compromised.

So if you go through the security features’ list, you’d notice that if you choose to store your Bitcoin cash funds on the Ledger Blue, there’s little to no chance of them being compromised whatsoever.

Bottomline is, after the Ledger Blue, the Ledger Nano can totally be the best savior, bank vault or whatever else you wish to term it for your Bitcoin cash funds. 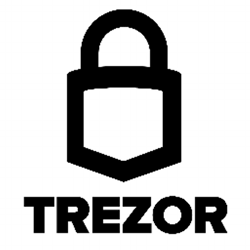 The final hardware wallet which can without an iota of doubt be included in this list of the best Bitcoin cash wallets is Trezor.

Primarily, it’s not shaped as a USB device but is rather of its own unique shape. And Secondly, it offers a wider-range of installation methods.

But overall, it does what any other device on this best Bitcoin cash wallets list would do, help you store your Bitcoin cash funds in a secure environment.

How secure? Let’s have a sneak-peek:

Apart from these core-features, the basics are nearly the same as the other two hardware wallets we’ve just discussed.

You might find shuttling yourselves between the Ledger Nano S and the Trezor, we did too. At the end of the day, it’s all about personal choice. You might like the design of one better than the other, feature-wise they aren’t much different.

Bottomline? Trezor is one of the most trusted Bitcoin cash wallets (also supporting other currencies) in the industry, show some faith and go with it in case you aren’t going with the other two options discussed above.

Desktop Wallets are wallets which can be downloaded on your desktops. These aren’t as secure as “Hardware Wallets” but are without doubt the next best thing.

These come in the shape and sizes of executable software which can be run on just about any major operating system out there.

This is first soft software wallet that fully dedicated to Bitcoin cash, because these days most users prefer electrum bitcoin wallets for the daily transaction that why after forking process, Electrum launched his new wallet that accessing all available bitcoin cash wallets.

For Example: If your electrum wallet has 10 BTC and you want to get access available bitcoins cash then you need to install Electron Cash wallet in your PC then you can easily get available 10 Bitcoin Cash and can perform the required transaction.

You can use electron cash wallets for your all Bitcoin cash transaction because this is trusted source. These days Electrum is leading source for soft wallets.

It’s crafted in the image of “Electrum” (Yeah the popular Bitcoin wallet) and is a fork of the same, the only difference is it provides nearly the same features, but for Bitcoin Cash.

Bitcoin Unlimited is the second contender on this list of the best Bitcoin cash wallets, more than a wallet, it’s a revolution in itself whose primary aim is to reduce transaction fee, as well as confirmation time.

Without getting into the technicalities, the best way we can explain Bitcoin unlimited is that it’s used to create “signals” or “votes” on steps which will lead to a better future for Bitcoin.

The primary issue being addressed by the Bitcoin Unlimited team and supports is the issue of “Block size”. Currently, only developers get a say on “block size determination”, but Bitcoin Unlimited wishes to transfer this power over to Miners as well as users!

Some of the key features of the wallet are:

So those two are the best available options for Desktop best Bitcoin cash wallets, let’s move forward towards the hardware wallets which let you store Bitcoin cash. 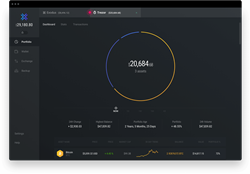 Exodus is a wallet which is available across not just Desktops, but also mobile devices and Hardware wallets. It supports over 100 currencies, and Bitcoin Cash sure is one of them which makes it one of the best Bitcoin Cash wallets.

It also features an in-built trading exchange which can be used to swap on coin for another. We’ve explained in-depth the features of its Mobile app in our Exodus Wallet review.

The platform even though doesn’t have live-chat, does feature a support which replies via e-mail and in the on-site chatbox.

Mobile wallets are simply wallets which can be downloaded on Mobile devices as an App and then can be used to store your Bitcoin cash funds. 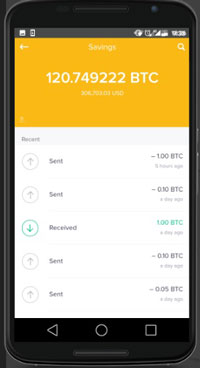 Starting with the user-interface, we don’t think it could be any simpler. It simply has multiple screens to show you your funds, transaction history and everything else. If you’ve used the Facebook app, or even just any Smartphone in general, you’ll find your way around the wallet.

Well, the one feature which grants it an extent of marketing edge is its capability to let you buy Bitcoins directly from within the wallet. Something that very few wallets in the industry support.

As far as security features go, here’s what it offers:

Bottomline is, it’s one of the best Bitcoin cash wallets you’ll ever cross paths with, especially for your mobile devices, period. 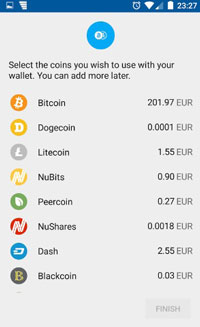 Coinomi’s primary selling point is its extensive currency support, it supports nearly every cryptocurrency and altcoin out there.

And that list most obviously includes Bitcoin cash as well. Considering it’s a mobile-wallet, we did give its user-interface a hard time while testing it out, but we must admit it passed with flying colors. Accounting for easy, simple and “first-timer friendly” user-interface.

As far as the security and performance of the Bitcoin cash wallets goes, here’s what Coinomi offers:

Even when compared to the Bitcoin.com wallet, it doesn’t come up short and proves to be a good alternative. 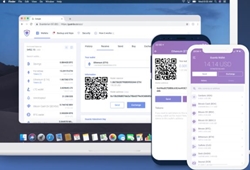 Guarda launched back in 2017, that’s 3 years from today. It’s registered in the EU as “Guardarian OÜ”  and also has a FIU license – FVR000109. Even though it’s not exclusively a “Bitcoin Cash” wallet, it sure supports the Cryptocurrency in addition to hundred others.

The wallet is available for Desktop, Android, iOS devices, and even as a web-wallet (browser extensions). Here are the primary features which make it one of the best Bitcoin Cash wallets:

In a nutshell,  it may not be the absolute best but sure is up there in the list.

With so many options, you’re bound to get a bit confused.

If you simply need the most secure Bitcoin cash wallet, go with Ledger Blue.

Let me break it down for you-

Hardware wallets may not be the “simplest” to use, but they’re certainly the most secure.

As in, no one can just turn on the Internet on your Ledger Blue or any other hardware wallet and steal your coins.

Then, the Hardware wallet funds can be accessed only after multiple layers of authorization.

Even when lost or stolen, your coins remain safe because of the passwords, and hidden wallets.

Desktop wallets are for you if you do not wish to invest in a hardware wallet, and yet need the maximum security.

However, there are multiple loopholes using which desktop wallets can be hacked.

These can be used both for daily transactions, as well as long-term holding.

Mobile wallets too are secure, and are arguably the simplest of these three.

However, they too, alike Desktop wallets can be hacked.

Finally, there are web-wallets. These may be simplest of all, but the least-secure. Never store Bitcoin Cash (or any other Cryptocurrency) in web-wallets.

So finally, which wallet actually wins the crown as the best Bitcoin cash wallet? I won’t point out any single wallet here, but as a general rule Hardware wallets are the most-secure, so if you’ve got a good enough sum to hold, that’s what I’d suggest you to go with.

But, if the sum isn’t as large, and you do not wish to invest in a hardware wallet, do give Electron cash a try for your desktops. Electron cash wallet can manage your all daily Bitcoin Cash transaction with privacy.

And for the mobile devices, both the wallets we’ve talked about serve the purpose.

Bottomline is, every Bitcoin cash wallets on this list is secure and feature-rich, so do let us know which wallet you zero-in on, and why.