I’ve been going over how Bitcoin isn’t completely “anonymous” since forever. So today, in this Anonymix review I’ve decided to give you a brief outline of “why” it’s not anonymous.

Ah I see, you’re smart and you paid cash! You paid the cash in person to someone, where and how did he/she purchase their coins from? Don’t you think the person would know who you are?

Considering you went to extreme lengths to prevent recognition, let’s assume you did manage to get your hands on anonymous coins.

Where are you storing them now? An exchange? An online wallet? Again, even if someone doesn’t know who purchased X set of coins, can get access to who owns the wallet where the coins are sent to.

Also, how do you know the coins you purchased on some P2P exchange are clean? That they aren’t stolen/ hacked/ or had been involved in illegal activities? (Darknet Markets, Terrorism-funding, Randomwares and so on).

So in a nutshell, Bitcoin isn’t anonymous and it’s extremely important to make it so! That’s where this Anonymix review comes in.

Anonymix is a Bitcoin mixer, and alike most other mixers it too helps users anonymize their coins (hence the name).

In the simplest possible words, a Bitcoin mixer takes a user’s unclean coins and send the user a different set of clean coins. These new coins can’t be linked to the user’s previous set of coins.

In a way, it’s like giving someone a USD $10.00 note, and taking back multiple notes or coins equating to USD $10.00 (minus a bit of fee for their services). Your old note can now not be linked with whatever you do with this new set of funds you have.

Here we outline the primary features and overall outline of the mixer before diving deeper in this Anonymix review. 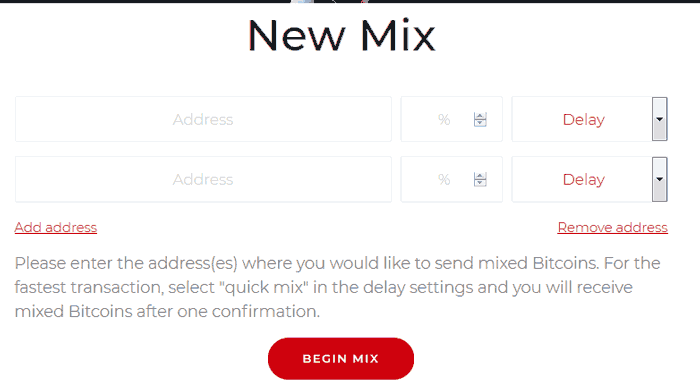 As is probably clear, there’s no rocket-science to understanding the platform. The address-box is where a user would enter their output address (s).

The delay menu lets users select a delay between the input and the output. And in case of more than one addresses, there’s the % box which allows users select the amount of funds each of their addresses should receive.

In my understanding, the interface can be easily understood even by the newest user in the Crypto-world.

Considering how it’s “Anonymity” we’re looking for, isn’t it better to send the clean coins to multiple address(s) rather than just one?

Anonymix is one of the most address-rich mixer’s I’ve ever seen. It allows for as many as 10 additional addresses. 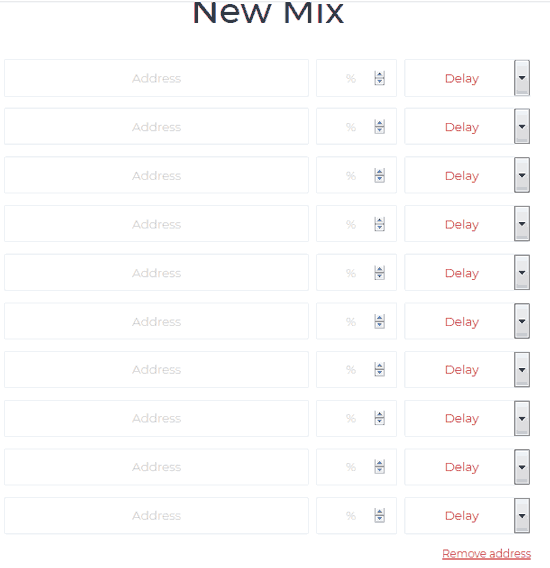 More addresses make it harder for third-parties to trace the transactions, or link the unclean coins to the new ones.

Primarily because the total funds are now broken down into many smaller parts and then sent to each individual address. Also it’s just naturally harder to track 10 addresses as compared to tracking 1.

As we just mentioned, more addresses would mean breaking down of the total funds into smaller parts.

Although unlike most other mixers in the industry Anonymix allows users to manually specify the fund-distribution for each address.

Meaning they do not randomly specify % of funds to each address, rather the users decide how much of their funds would go into each individual address. This is what we meant by saying “user-controlled fund-distribution”.

It obviously boosts anonymity as the funds received in any of those addresses, is totally different from the input of unclean coins which was sent to the mixer. Hence, de-linking the input from the output.

So far, we’ve broken down the funds into multiple parts and sent to multiple addresses.

But there’s yet another factor which would make the coins further de-linked. The delay between the input, and the output (s).

Anonymix not only lets the users control the time-delay (not every mixer allows this); but also facilitates customizing the delay for “Each address”.

It deserves a praise because most other mixers do not provide such control over each output address’ individually.

So with Anonymix, users can specify the exact time-gap between their initial input, and the delay after which funds should be sent to each individual output address.

Apart from the direct features a mixer provides, there are a number of indirect/ features which impact the anonymity.

Fortunately, Anonymix is one of those mixers which doesn’t require “registrations”. So there’s no question of any personal data being required or leaked.

Rather, users get access to their mix status and other details using a “mix ID”. This is the only link between the user and their mixing transaction.

Because this Mixing-code is a randomly assigned string of numbers, it can only be linked to the user’s mixing transaction, but the transaction can’t be linked to a user’s real-life identity.

Can there be any anonymity if a mixer keeps logs? Obviously there can’t be. Anonymix not only offers a No-Logs policy, but also user-control over it.

Although the log also contains the “mixing ID” hence deleting logs before a mix is complete would render all support for the mix null. The mixer won’t anymore be able to fetch details for the mix and hence assist you in case there’s a problem.

Obviously every mixer charges a fee for its services. This is an aspect of this Anonymix review we aren’t a 100% happy with.

Be confused not, it’s not the “amount” of fee which we’ve a problem with. The fee actually is pretty cheap, affordable and parallel with industry-standards.

The mixer charges a mere 0.3%/mix. As for additional addresses, they’re charged at 0.0001 BTC/address. Both of which are more than acceptable.

Getting to choose the fee not only provides for more options but also adds to the anonymity. Although it’s still not a deal-breaker.

I’ve been with mixers which have pretty high minimum-requirements. Or some had very low maximum limits.

Fortunately, Anonymix understands the value of affordable limits and hence accepts deposits as low as 0.002 BTC.

When it comes to maximum limits too the platform allows a hefty 100 BTC maximum deposit, which is equivalent to nearly a million USD at BTC’s current price.

The number of required confirmations is just 1. Although the actual delivery time of the coins would obviously depend on the user’s time-delays.

Based on the features and problems mentioned in this Anonymix review, here are the Pros and Cons associated with the company:

So that’s all I had to pour on this Anonymix review folks. Personally I believe it ticks most if not all the boxes we seek in any Bitcoin mixer.

It doesn’t need registrations, doesn’t keep logs, 10 additional addresses are more than enough in most cases and so on.

The amount of user-control is completely impressive. Users control almost every aspect of the mix except the fee. The User-interface too is newbie-friendly and doesn’t need any prior experience.

The platform also agrees to send the funds out after just 1 confirmations so there’s no major wait-period either.

All in all, I do believe it’s a pretty approachable mixer. Do let us know what you think of this Anonymix review, as well as the mixer.